What to Eat in Paris

No matter where you go when you travel, you’ll need to eat at some point. But with some destinations, eating can rightly be considered one of the things on your “to-do” list while you’re there – and Paris is one of those places.

Paris – not to mention the entire country of France – is world-famous for its cuisine, so it makes sense to go into a trip to Paris with a list of French foods you want to make sure you don’t miss while you’re there. This is by no means an exhaustive list of all the French delicacies that you can find in Paris, but it will most certainly get you started and help keep you sated in between visits to the many museums in Paris.

>> If you’re traveling on a budget but still want to eat well in Paris, be sure to check out these tips for finding cheap eats in Paris.

What to Eat in Paris for Breakfast 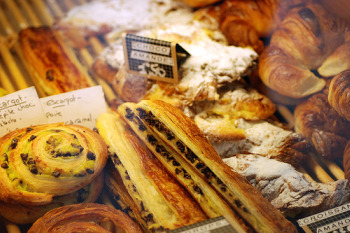 The French don’t eat big breakfasts, and this is especially true in Paris. The typical Parisian breakfast consists of a croissant and a cup of coffee – and not only will this smaller breakfast help save you a little money each morning, it will also give you a chance to eat something very French every single day. I’m talking, of course, about the croissant.

The name itself is French, meaning “crescent,” and refers to the shape of the pastry – but don’t feel limited to just sampling the actual croissants your chosen cafe is serving. Pastries in Paris are an art form, and, at their best, are light, flaky, crisp on the outside, and chewy on the inside. Besides the traditional croissant, other breakfast pastry options include:

There are other pastries in Paris that are more appropriate for dessert – like eclairs and profiteroles – but you’re on vacation. If you want an eclair for breakfast, go for it.

If all of these options are too sweet for your tastes first thing in the morning, another option is to enjoy some of that famous French bread – pretty much any bread shape will do, although a portion of a traditional baguette with some butter and jam makes a lovely breakfast. There’s also the puffy brioche, which has a touch of sweetness but not nearly as much as the pastries listed above.

What to Eat in Paris for Lunch or Dinner 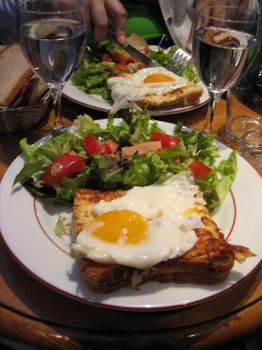 I’m lumping these two meals together here because you will sometimes find smaller versions of the dinner menu available for lunch, which helps travelers on a budget sample some famous Parisian fare at a lower cost. It’s also a good idea to look for prix fixe menus for whatever meal you’re making the largest of the day, since you’re more likely to get a better deal (not to mention food that’s actually in season and fresh) if you go with the chef’s choice for the day – but you’re still going to get quite a bit of food!

Some of the things you’ll see on menus in Paris that you can consider for lunch or dinner, depending on your dining style when you’re traveling, are: 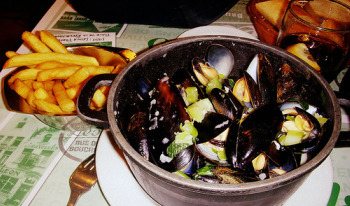 Luckily, waiters in Paris will no longer look down their nose at you if you’d like just a salad for your meal – especially since so many salads in Paris restaurants these days are quite large enough to be lunch (or even dinner) all by themselves. Here are some different kinds of salads in Paris, most of which are meal-sized.

Not all of the popular food in Paris is French, however. This city has a sizable immigrant population, and two dishes in particular that have made their way into the Parisian consciousness to the degree that the locals probably don’t even think of them as “ethnic” anymore are couscous and falafel.

Couscous comes to France by way of North Africa, and it’s particularly common in certain neighborhoods of Paris. It’s an excellent budget-friendly meal (for locals and travelers alike). Read more about couscous in Paris.

Falafel is another import from North Africa and the Middle East, and it’s good as a snack or a light lunch – especially when it’s served in a pita as a quasi-sandwich, meaning it can be eaten with the hands and without sitting down at a restaurant table.

What to Eat in Paris for Snacks 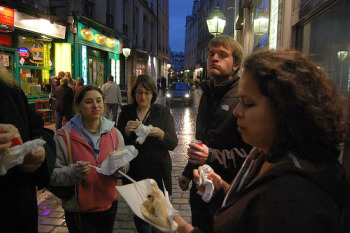 Parisians don’t “snack” the way people do in some other countries, but if they’re looking for something quick between meals or – and this is especially Parisian – to sustain them through a night of clubbing, the most popular things are cheap, quick, and eaten with the hands. In other words, between-meal foods that are still very Parisian include:

But maybe you’re not Parisian. Maybe you’re running around all day from one museum to the next, burning through your breakfast croissant or lunchtime croque monsieur too quickly. What then? Is snacking midday just too gauche?

The truth is, you’re on vacation – and since eating in Paris is such a delight, there’s no reason you shouldn’t indulge in more than three meals a day. But if you’re looking for a typically Parisian snack that isn’t a full-fledged meal, you really can’t go wrong with a crusty baguette from a good boulangerie, a selection of fine French cheeses, and maybe some pate for good measure. Take all of these things (plus a bottle of water or wine, depending on your preference) to a nearby park and enjoy a perfectly Parisian picnic.

What to Eat in Paris for Dessert

Thankfully for anyone with a sweet tooth, Paris will not disappoint in the dessert category. If you’ve enjoyed a good meal at a restaurant, chances are the desserts there will be tasty as well. Some French desserts you might find on offer are:

Also keep in mind that to many French people, a selection of fine cheeses is the perfect way to end a meal. So if you’re looking for a dessert alternative that’s less about sugar, you could try a cheese plate (many places will bring out all the cheese they have and you point to the ones you want pieces of; these are sometimes served with honey or jam for drizzling on certain cheeses).

But if you’re looking for a more portable option to satisfy your sugar craving, here are a few things you can hunt for while in Paris: 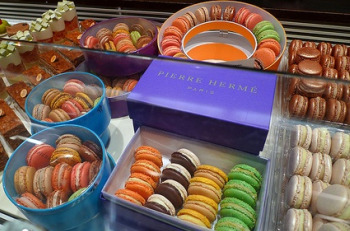