Paris, like most dense cities, is most easily conquered using public transportation. There are even many people who live in Paris and don’t own a car. Most visitors to the city are smart to avoid renting a car and sticking to public transportation to get around – but if you’re planning lots of day trips into the countryside, to places where train and bus service is more sporadic, then having a rental car for some portion of your Paris visit might be a good option for you.

In order to figure out the best strategy for your particular trip to Paris, have a look through this list of all the various ways to get around in Paris.

>> Many people looking to master the transportation in a city are also looking for other travel-planning advice – which is why I’m happy to point you to our helpful visitor’s guide to Paris, complete with links to just about every subject you could wish for.

>> And if you’re looking for specific tips on how to get from Paris to other places in France and Europe (or vice versa), skip ahead to this section.

Train Travel In & Around Paris 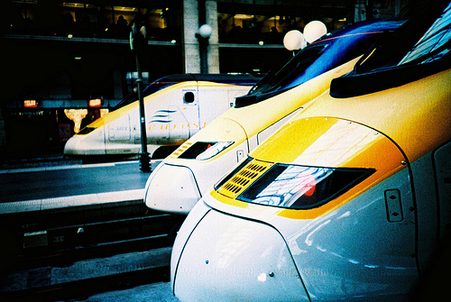 France’s train system – the SNCF – is one of the best in the world. Trains normally depart and arrive on time, and the TGV or Tres Grand Vitesse (the country’s bullet trains) move smoothly and cut your travel time between big cities in France as well as European capitals.

Second class accommodations on France’s trains are so comfortable that there’s really no need to opt for first class. The only negative here would be some of the WCs, which are not always kept in spotless condition. Trains that have meal service will show a knive and fork on the departure board (this might be as simple as an ambulating sandwich cart, however), but don’t rely on meal service on all long train rides – it’s usually a good idea to carry a bottle of water and a little snack with you, just in case.

Paris, as you might expect, is a major hub in the SNCF network, so it’s exceptionally easy to get from Paris to other destinations in France as well as cities outside the borders. This is handy whether you’re in Paris as part of a bigger tour of Europe or whether you’re just hoping to take a day trip or two outside the capital during your visit.

>> For trips beyond Paris, also check out this information about train travel in France

Train tickets or a Eurail Pass?
You have two options when it comes to train travel in France – either you’ll arrive in the country with your Eurail Pass and be using that instead of train tickets, or you’ll be buying train tickets as you go. It’s important to do a bit of math well before you leave home to see if you’ll save money with a Eurail Pass (if you’re taking a few day trips or traveling to several cities in addition to Paris, it’s likely you will save money with a Eurail Pass), but if you get to Paris without one you can always buy tickets as you need them.

When you’re weighing your options in the Eurail Pass v. train ticket debate, here’s what you need to know:

It’s easy to figure out what tickets cost for the trips you’re taking by looking up those routes on the SNCF website (don’t worry about plugging in exact dates). And you can look up the costs of the various Eurail Passes that include France, dividing the cost of the pass by the number of days it’s good for. If the per-day cost is less than the tickets you’d buy, then a Eurail Pass is likely to be the better choice.

If, on the other hand, you don’t have any fixed plans and aren’t sure whether you’ll be taking one day trip, five day trips, or none – then the flexibility you require may not make a Eurail Pass a good deal. You need to be sure you’ll use the days on your pass in order to make it worth buying.

Buying Train Tickets in Paris
If you’re traveling without a France Railpass, then you’ll need to buy train tickets for each train trip you take. Thankfully, the days when you’d have no choice but to wait in long lines at the ticket counter are gone. You can still wait in line, and they’re not typically as long as they used to be, but if you’re comfortable buying tickets using an automated machine you can usually get what you need and get on your way much more quickly.

Here’s how to use the automated ticket machines in France’s train stations:

Don’t forget to validate your ticket before you board your train! Look for the little machine to “composter” your ticket, which stamps it with the date, and then you can get on the train. If you’re on a trip that required reservations – or you just bought reserved seats anyway – you’ll need to look for whatever car and the particular seats you’ve reserved. Otherwise, if you just bought a ticket but don’t have a reserved seat, you need to hunt for a seat in the class you purchased that’s not already spoken for.

Train Stations in Paris
Paris has several major train stations, and it’s important to know which one your train arrives into or departs from. In some cases (i.e. Spain), you may depart from one station and return to a different station in Paris. Each station is also close to a Metro station and other public transportation, in case you need to get from one station to another, but it’s easier if you can avoid that cross-town trek.

>> More information about Eurostar which connects Paris to London (Gare du Nord, Paris & St. Pancras Station, London), and tips on your other options of how to get from Paris to London 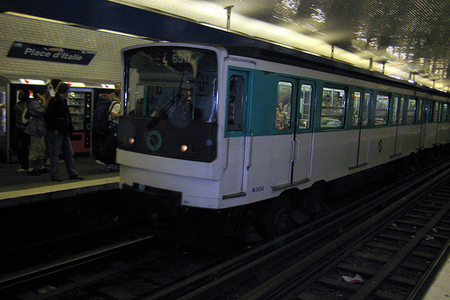 Paris’s subway system called the Metro is an institution. It’s the quick, inexpensive way to get around town. Generally, the Paris Metro is reasonably safe – watch out for your personal belongings in the same way that you would do so in any major cosmopolitan city.

Be aware that getting in and out of Metro stations almost always involves stairways, and even when there are elevators there may be a section with a couple steps as well, so it’s not ideally suited to people who have difficulty with stairs. ‘Seeing eye’ dogs are allowed in the Metro – and anyone accompanying visually impaired travelers can ride for free.

RER Trains
While you may spend your whole time in Paris riding the underground trains and never know when you’ve hopped on an RER train vs. the regular Metro, it’s a good idea to know about them.

Within the Paris that most tourists are spending time in, they’re interlinked with the Metro lines to such a degree that many share the same stops and will take you to the same places. But they also go far beyond the borders of Paris – to places like Versailles and Disneyland Paris, as well as Charles de Gaulle Airport.

If you’re riding any of the five RER lines within the city center, all you’ll need is the same ticket you’ll use on the Metro, so that part is simple. It’s when you leave the city and head out for a day-trip somewhere that you’ll need to get a special ticket.

>> Learn more about how to use RER trains in Paris

Buses in Paris
Even below the RER on most tourists’ radar is the network of buses in Paris, but depending on where you’re staying you might find that the most convenient form of public transportation from your Paris hostel‘s front door is a bus rather than a Metro stop. So it’s a good idea to familiarize yourself with the buses, especially if you’re going to be staying in or visiting any of the areas that are well-covered by bus lines.

>> Learn more about how to use buses in Paris

As mentioned above, if your trip to Paris also includes day trips into parts of France that are less well-served by public transportation, then renting a car in Paris may be a good option for you. Keep in mind, however, that driving within Paris can be a headache – especially when you don’t know your way around all that well – so you might want to avoid some of that hassle by renting a car at Versailles instead of within the Paris city limits.

Next on your list of things to know before you get behind the wheel in Paris is what France’s driving laws are. You may be familiar with some of them, but some will likely be things you hadn’t thought of – and you don’t want to be introduced to a law by the French police officer telling you how you just broke it. Another reason to click through to that link about driving in France is that the article includes some estimated drive-times from point to point in the country, which is handy whether you’re doing a day-trip from Paris to somewhere nearby or whether you’re setting off on a tour of the whole country.

If you will be driving a car in and out of Paris, you’ll also need to familiarize yourself with where and how to park in Paris, too.

>> To head out of Paris and get to one of the country’s many famous wine regions, here’s what you’ll need to know about getting from Paris to Bordeaux.

>> And if the Mediterranean is calling your name, find out how to get from Paris to the South of France… Then, if you’re looking to go further afield, learn how to get from Nice to Barcelona.