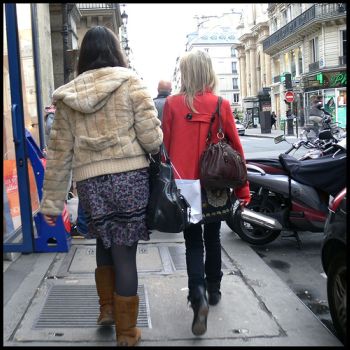 Why does everything – from pastries to clothes, jewelry and home furnishings – just look better in a Paris window?

Parisians have a knack for display and presentation. They’ve been doing it for centuries. Here, appearances are everything, but that’s only one of the reasons why window shopping is practically a national pastime. French people do a great deal of window shopping – it’s a way of comparing styles, quality, and prices before deciding to make a purchase. Some Parisians wait to see which fads become instant flops and which fads integrate well into streetwear. And some keep an eye on a desired item until one of the big sale seasons in Paris.

>> For more about the sale seasons, be sure to read our Guide to the Annual Sale Periods in Paris

But window shopping – and, indeed, actual shopping – isn’t just for the people of Paris. Plenty of visitors show up in Paris each year with an empty (or nearly empty) suitcase, just waiting to be stuffed with treasures purchased along the Champs-Elysees or in the Galeries Lafayette. Whether you’re looking for something in particular or are simply browsing until something fabulous catches your eye, Paris can be a shopper’s dream.

Unfortunately, shopping in Paris can also be an expensive diversion. It doesn’t have to be, but unless you know what to look for you’re likely going to be steered in the same direction as anyone else asking about “Paris shopping” – which are the most high-end shops. Pretty to look at, not so fun when you get your credit card bill.

In this article, you’ll find a few tips about shopping in Paris on a budget, and also some general Paris shopping advice regardless of how much you’re planning to spend.

For many people, the only goodies you’re planning to bring home are souvenirs to remind you of your trip to Paris – although you’ll likely indulge in some window shopping along the fancy boulevards (and who can blame you?). So if it’s just a miniature Eiffel Tower or a beret you’re looking for, here are some tips about souvenir shopping in Paris:

>> More information on non-touristy Paris souvenirs, and – on the flip side – some of the tackiest Eiffel Tower souvenirs out there!

There are lots of flea markets in Paris, and you don’t have to be an antique-hunter to enjoy browsing through them. You’ll also find all manner of clothing, shoes, household items, and random trinkets that – if they seem Parisian enough to you – might just help you remember your trip once you’ve put it in a place of honor back home.

There are three big flea markets in Paris, all of which are outside the road that circles the city center – so you definitely have to be headed for one of them on purpose. You’re not likely to stumble on one by accident. But anyone who enjoys looking for treasures or finds shopping to be an adventure will surely appreciate the variety (and often the deals) available at Paris flea markets.

>> More information about the flea markets in Paris, including how to get there & shopping tips

Food isn’t likely to be something you’re planning to bring home (and if you’re thinking about it, be sure to read up on what you’re legally allowed to bring back into your country – you certainly don’t want to spend hard-earned cash on a beautiful French cheese or sausage only to have it confiscated at customs!), but you can absolutely enjoy shopping in Paris’ food markets and food shops while you’re in the city. Whether it’s just to make a picnic lunch or to pick up a snack, a visit to Paris’ food shops is also a great way to learn about French foods you might want to seek out when you’re at home.

There are big chain supermarkets in France just as there are in other parts of the world, but for a more old-school experience visit specialty shops that sell only one or two things. And for the best prices, find out when and where the open-air food markets in Paris are held.

>> More information about the different kinds of food shops in France, and tips for market shopping in France.

This is Paris we’re talking about, so you’ll find shopping opportunities just about everywhere. But there are parts of the city that are better-known for their shopping – they’re listed below, along with a few favorite spots worth sharing and the Metro stops you’ll need for each.

Shopping on the Right Bank

Shopping on the Left Bank

Paris Shopping on a Budget

Not all shopping in Paris has to be the kind you’d need a trust fund for. After all, Parisians like a bargain as much as anyone. So if you’re on a limited budget and you still want to be able to smugly say, “Oh, this? I picked it up the last time I was in Paris,” when someone asks where you got that fetching bag, then this is the part to pay attention to.

>> Also don’t forget that there are English bookstores in Paris, too, if you need some reading material for your trip home!