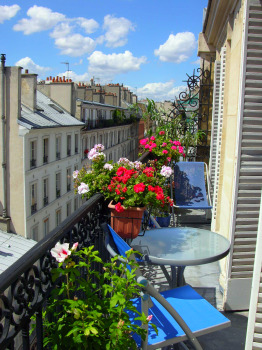 Bed & breakfasts are more typically associated with the United Kingdom and are found regularly in the United States, but France also has its own version of the B&B – it’s called (in French, of course), the chambre d’hôte. The word chambre simply means “room,” and hôte means “guest.” You may also still see the English phrase “bed & breakfast” used in some listings, as the term is becoming somewhat universal in the tourism world – but as the concept of the chambre d’hôte is a long-standing one, it’s not uncommon to see the French term used instead.

The arrangements at a chambre d’hôte can vary, although the majority of the time they are bedrooms in someone’s private home and include at least one meal (usually breakfast). In some cases, the proprietors of a chambre d’hôte will include two meals with the price of the room – usually breakfast and dinner – and it is often a real treat to have dinner with the homeowners. If you want the experience of staying with friends in Paris rather than staying in a hotel, this is certainly a good way to get that.

>> You will often find listings for B&Bs in Paris mixed in with hostels and budget hotels, as they’re a great option for budget travelers, so looking for the words “bed & breakfast” or “chambre d’hôte” when you’re scanning the lists of Paris hotels and hostels in Paris is a good idea.

What to Expect from Paris B&Bs

The word “breakfast” may be included in the term “bed & breakfast,” but the typical Parisian breakfast is fairly minimal, so don’t expect a big breakfast spread of eggs or waffles. Most B&Bs in Paris will provide the same kind of breakfast for their guests that the Parisians would eat for breakfast themselves – a pastry (or bread/toast), coffee or tea, and sometimes fruit or juice. If you want a big American- or English-style breakfast, you’re better off booking a stay in a major chain hotel that promises that kind of breakfast fare.

As mentioned, sometimes the hosts at a Paris B&B may offer a home-cooked dinner as part of the package (or at an additional cost), which is something you can choose to partake in or not. It’s usually a situation where they’ll invite guests to have dinner with them well in advance (perhaps even in the booking process), so it’s something they’re planning on doing for you on a particular night. In other words, if you accept an offer for a home-cooked dinner, don’t cancel them or make other last-minute plans.

There’s usually an advance deposit required when you stay at a B&B in Paris, and because these are private homes without a “reception desk,” they will usually want you to be clear about the time you plan to arrive and depart so they can plan their day accordingly and be there to meet you. Even if you know roughly when you’ll get there, you may still be asked to call the day before with a more precise arrival time.

The quality of B&Bs in Paris varies widely, as you might expect, and depends largely on the personality of the hosts. If you don’t feel like you’re learning enough about a particular B&B from their website or other online resources, you might want to exchange an email with them to ask a few questions before you decide. But it’s also important to remember that you are a guest in someone’s home, whether you’re paying for it or not, and there are some things you should remember on that point. Which brings me to…

Tips for Staying in B&Bs in Paris

These may seem like little details, but it will make your host or hostess in Paris look forward to your next visit.

>> You can look for Paris B&Bs on this website.