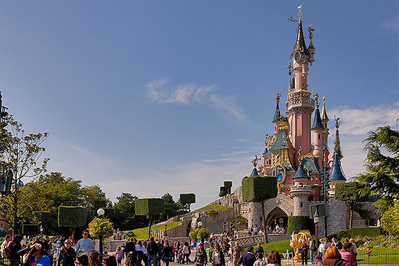 While some people might never dream of incorporating a thoroughly American stop like Disneyland into their Paris vacation, the fact is that Disneyland Paris is one of the most popular tourist attractions in the region – and if you’re traveling with kids, a Disney-aholic, or just want a break in the usual museum/gallery routine, then a day spent at EuroDisney is a great alternative. The fact that it’s easy to reach from Paris, via car or public transportation, makes it even more appealing.

What to Do at Disneyland Paris

Like any true Disney theme park, Disneyland Resort Paris is a combination of amusement park rides, hotels, restaurants, and other recreational attractions. Euro Disney (as Disneyland Paris is often called) includes not one but two theme parks, in fact, and seven hotels.

Disneyland Park Paris
The first Disneyland Paris theme park is Disneyland Park Paris, which includes many of the same features you’ll find at other Disney properties. There’s Frontierland, Adventureland, Fantasyland, Discoveryland, and the popular Main Street U.S.A. A Disney train runs through several of the different “lands,” allowing for easy access between them.

Lake Disney
As if it wasn’t enough to have a Disneyland Paris theme park, there’s a man-made lake at EuroDisney – called, what else, Lake Disney – which is at the center of three of the park’s resort hotels. It’s not exactly part of the recreation, but at least it’s pretty.

Where to Stay at Disneyland Paris 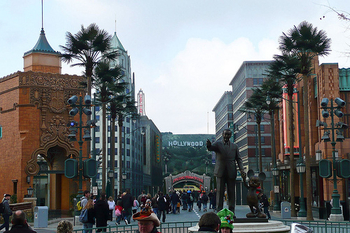 As mentioned, there are seven Disney-operated hotels at Disneyland Resort Paris, but those aren’t your only options. You can also choose to stay in one of the six non-Disney hotels near the park which offer free shuttle rides to and from EuroDisney. When you’re booking your hotel, if you’re planning to spend most of your time at Disneyland Paris just make sure to find out about the free shuttles – where they pick up and drop off, and when they run. Also note that if you choose to stay at Disney’s Davy Crockett Ranch (which is a Disney-operated hotel), the free shuttle buses don’t run to that hotel.

Getting Around at Disneyland Paris

You can get around most of Paris Disney easily on the Disney Railroad, including getting between the two main theme parks. There are also free shuttle buses which run between almost all the hotels in the area.

Getting to Disneyland Paris

Disneyland Resort Paris is located roughly 20 miles (32 km) east of Paris, and it’s pretty easy to get there whether you’ve got a car at your disposal or not.

>> Find the most detailed information about getting from Paris to Disneyland Paris, including by train and by car, and even directions from the airport directly to EuroDisney.

Driving to Disney from Paris 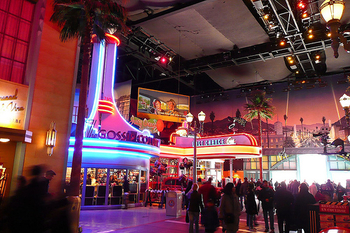 Coming from Paris, you’ll want to take the A4 expressway in the direction Strasbourg/Metz. Disneyland Paris Resort is in Marne-la-Vallee. Take the Peripherique until you get to the east sector near Bercy where you’ll find the A4 exit, direction Metz/Strasbourg. To go directly to the parks, take exit 14, “Parcs Disney/Bailly-Romainvilliers.” To go to the Disney hotels, keep going and follow the signs for “Disney Hotel.” To get to Golf Disneyland, keep going and follow the “Golf” signs. To get to Disney’s Davy Crockett Ranch, take exit 13, “Provins.”
>> Parking at Paris Disney is free for guests of the Disney Hotels (and some of the other Disney-approved hotels, be sure to ask when you’re booking), and otherwise costs €8 or more per day per car.
>> More driving directions from other points in the region can be found on this page.

Taking the Train to Disney from Paris
Either the Thalys, the Eurostar, or the RER A4 will get you right to the entrance gate of Disneyland Paris – they all stop at the “Marne-La-Vallee/Chessy” station. Not only is this station right in front of the main entrance to the parks, it’s also very close to all but one of the Disney hotels. Perhaps the easiest train trip is via the RER A from Paris – it takes just 35 minutes one-way to get from the Paris city center to Euro Disney on the express train, and trains run about every 20 minutes. The RER A stops at Charles-de-Gaulle Etoile, Auber, Chatelet-les-Halles, Gare de Lyon and Nation.

Take the Bus to Disney from Paris Airports
If you’re just gung-ho to get to Disneyland Paris right away, then you can take an airport shuttle bus directly to the theme park. The VEA Airport Shuttle Bus links Charles de Gaulle Airport and Orly Airport with six of the Disney hotels. It runs every 15-60 minutes, 7 days a week. You can find out more on the bus company’s official website, or by calling +33 (0) 1 72 30 10 25. (Note that VEA is not suitable for disabled guests, nor is it available to or from Disney’s Davy Crockett Ranch.)

The official Disney Paris website is here, where you then choose the country you live in (this is for both language and travel deal purposes, so you don’t necessarily want to click on the British flag if you live in the U.S. – you can get to the United States page by clicking “Other Countries” on the right and then choosing USA from the drop-down menu, or by clicking this link).

(Oh, and a word of caution – these websites all come with very Disney-fied soundtracks and sound effects, so if you’re planning your Paris Disney vacation at work, you might want to hit the mute button before you visit.)