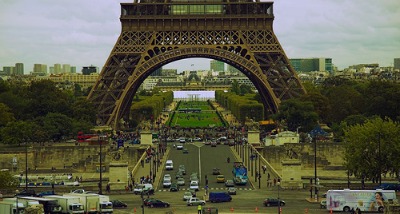 If you’re spending two weeks or less and want to rent a car, you’ll find that most of the major car rental companies are represented in Paris: Avis, Hertz, Alamo, Budget and Kemwel. They have agencies at the airports (CDG, Beauvais, Orly, Bourget) as well as at or near Paris train stations. You can compare prices and book your car rental before you arrive in France. You’ll need to have your flight arrival information available.

>> Rent a car in France before you leave home!

>> If you’re renting a car in Paris for trips outside the city, your best option is to rent a car in Versailles.

>> With a car comes the additional requirement of a place to put it – read all about Paris parking guidelines so you know where you can park your car in the city.

A U.S. or Canadian Driver’s License is acceptable for driving in France. Otherwise, an International Driving License is good to have. 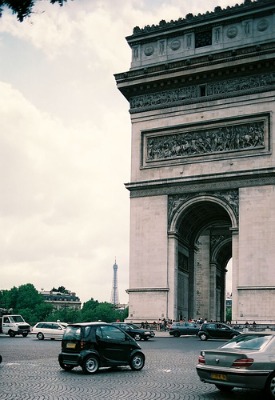 Generally, a standard shift is less expensive than automatic, and gas fueled engine is cheaper to rent than diesel. Diesel may still be a good option if you plan on putting on a lot of mileage. Insurance is normally included as part of your rental package.

Are you traveling light or heavy? If you get the smallest car such as a Peugeot 107, you won’t be able to fit a set of clubs in the trunk (or the boot). If you travel with huge suitcases, you may find the smallest model too be cramped – and you definitely don’t want to be leaving a bundle of luggage in the back seat – this is a ‘come steal me sign’ to car thieves. (Theft is not a big problem in Paris – as long as you don’t advertise you’ve got tons of luggage).

The advantage of small cars is that you can go everywhere and park anywhere. For France, the smaller the better. You’ll use less gas, and still have a peppy enough engine to negotiate the autoroute.

For years, we’ve been leasing the Peugeot 206/207 category. It’s perfect for two people. The engine is zippy. It comes in automatic. Most French car models come with air conditioning, air bags and a CD player. You’ll be given an instruction book (sometimes in French, ask for an English version if possible) along with a toll-free number for any accidents.

Picking up and dropping off

At Charles de Gaulle airport, the rental car booths are not always easy to find. For Terminal 1, you need to go down to the Boutique level. Depending on your company, you may need to pick up the phones for pick shuttle service to their lots, some of which are located on the outskirts of the airport.

Many of the major companies such as Hertz and Peugeot Sodexa (Kemwel) have offices in Paris as well as at the airport. For example, Hertz has a Montparnasse office where you can drop off the car in a garage near the Montparnasse train station. 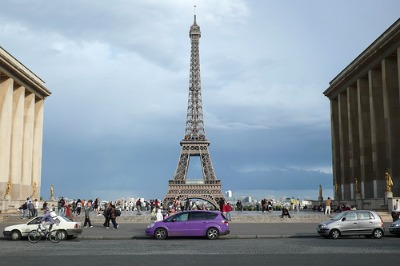 Normally French rental companies do not fill up the gas tank for you. They’ll give you just enough to get to the gas station. (There’s two on the autoroute from CDG to Paris). ‘Sans plomb’ means ‘unleaded’. Use the green pumps.

You will also have in your glove compartment, in case of accident, a ‘constat’. This is an accident report to be filled out if you should have an accident. Be sure to note the license plate of any other vehicle involved in the accident (especially if they leave the scene of the accident – like one Parisian driver did on the ‘periphe’). We took his license plate number so there was no problem.

All in all, once you get outside of Paris, driving in France is not unlike driving in the U.S.

French drivers tend to be more determined in their actions. You don’t find anybody lollygagging along – even in the French countryside. The best way to get around Paris is to drive with confidence – easier said than done – when you probably don’t know exactly where you’re going.

Just remember to keep your seatbelt fastened. Don’t drink. And be alert for the radar icons that look like the antenna icon on your computer. The photo speedtrap is a little box by the side of the road that will take your photo for posterity. Incoming traffic from the right usually has priority. Traffic lights are not as bright and will usually be found on the right side of the intersection rather than spanning the intersection. Many streets and avenues in Paris now have lanes reserved for bus and bicycle traffic. Some streets lack well marked lanes, so you have to scramble for your spot.

Parisian driving is an art form. I do not drive in Paris. It’s crazy enough being a passenger. Best time to drive in Paris? 10 am on August 15th.

>> Be sure to read through these excellent driving tips for France, including drive-times between major French cities and information about the different kinds of roads in France. 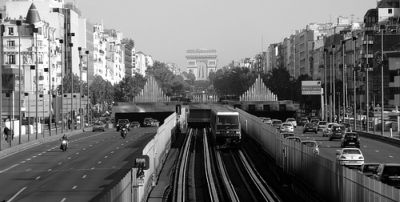 Leasing is a very good idea if you plan on spending three weeks or longer in France. You can lease a car for three to weeks to six months and this plan has many benefits.

First of all, you receive a brand new car. You become the owner, literally buying and selling back the car to the leasing company. You will be the proud owner for a few months with your very own ‘carte grise’ or gray card which is the car’s title.

We’ve been doing this for a number of years with Peugeot Sodexa, based in Paris. They work in tandem with Kemwel in the U.S. and UK.

You must lease your car before you come to France. Allow yourself ample time to send in all the necessary paperwork. Your brand new car will be waiting for you at the airport. Once again, insurance is included in the package.