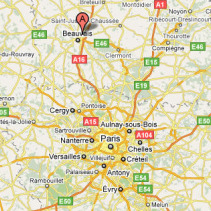 Most travelers heading to Paris know of Charles de Gaulle Airport and Orly Airport, the city’s two main international airports and the primary international gateways into the country. But Paris has another airport – kind of – that you might want to consider, depending on where you’re coming from and where you’re headed.

Paris Beauvais Airport (BVA) is one of those smaller airports near a huge city that’s home to a few budget airlines, so those budget airlines added the name of the huge city onto the name of the airport to make it seem like a good choice for people flying into the aforementioned huge city. Beauvais-Tille Airport (as it’s officially known) is quite a distance from the city of Paris, so if you’re planning to visit Paris and nothing else it may not be ideal.

However, because Beauvais Airport is the only Paris-area airport that’s served by budget carrier Ryanair, if you’re in Europe already it may be your cheapest option. Don’t think it’s your only cheap option, though, as there are also budget airlines that fly to Paris that use Charles de Gaulle or Orly airports instead.

Here are some things to know about Beauvais Airport before you get there.

This actually is a complete list of the airlines serving Beauvais Airport, because there are only three airlines so it’s easy to include them all. The cities they connect with are listed in parentheses.