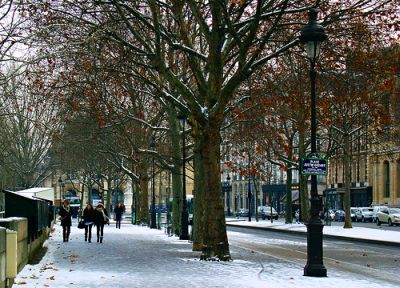 While summer in Paris is certainly when you will see the hoards of tourists descending upon the city, there are songs written about springtime in Paris and autumn in Paris has long been one of my very favorite seasons in the City of Lights, there is just something magical about winter in Paris.

While this certainly has little to do with the weather—which is usually damp, cold, wet and grey—there is something romantic about the way the historic city’s buildings look caste in the shadows of winter afternoon light and something cozy and festive about cupping vin chaud to keep warm at the Christmas markets. I will also never forget my December visit to Versailles, when snow was falling in the morning and gardens were blanketed with a shiny coat of a rare Paris snow.

Getting to Paris in the Winter

If Christmas lights, vin chaud, oysters and romantic scenes of the city aren’t enough to convince you to book a trip to Paris in the winter, perhaps the huge bargains and lack of crowds will. While you will often see a hike in prices right around New Year’s in Paris, most of the winter months offer deep discounts on everything from your airfare to Paris to your Paris hotel.

While you will find the most going on in December and the beginning of January for the holiday season in France, this is also when you’ll find steeper airfares and room rates at hotels. However, January and February are often the cheapest months of the year to visit the city (and you can still totally take advantage of the winter sale season). 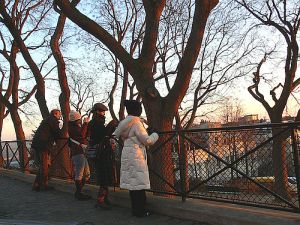 While there are a ton of great reasons to visit Paris in the wintertime, great weather and pleasant temperatures are probably not going to top your list. Like winter in most places outside of the tropics, winter is a chillier season in France. However, while winter in Paris is definitely damp, grey and chilly in general, you will rarely see much snow and temperatures usually stay above freezing.

As a Portland resident, I found winter in Paris to be a whole lot like winters in the temperate Pacific Northwest—average highs around 45-50 degrees Fahrenheit, grey skies and rain.

Pack your boots, a warm winter coat, scarf and gloves (read more about what to wear in France in the winter) and you should still be able to comfortably enjoy winter days walking around the city and sightseeing (though you may need a few more breaks in cafes to warm up with a café).

Things to do in Paris in the Winter

The great thing about visiting Paris in the winter is not only will you see few- if any-crowds of tourists, but there are so many great things to do indoors in Paris. Museums, cafes and restaurants are still open through the winter months, and you’ll find much shorter lines at all of them. Winter is a season that belongs to Parisians, which gives the city a different feel than in the summer months and can be a great opportunity to try to blend in and live like a Parisian. 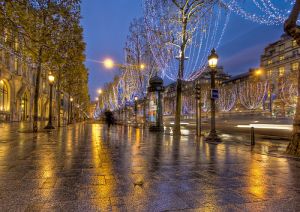 From November through the end of January, Paris’ most famous boulevard, the Champ Elysees basks in the glow of the strings of lights placed on the trees lining the street. The Champs Elysees isn’t the only place in Paris to get special holiday treatment either. Holiday lights and decorations appear across the city. In fact, Paris puts up 1,000 fresh-cut fir trees to decorate various endroits of the city (300 of which ring the roundabout at the lower end of the Champs.

The Galleries Lafayette, Printemps and other famous department stores also go all out with Christmas decorations and window displays, making simply window shopping (or as the French call it “window licking) an especially fun affair around the holiday season. 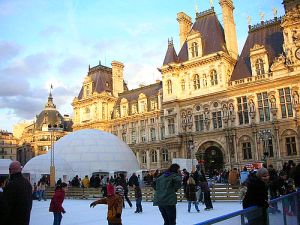 Several ice rinks pop up around Paris in the winter months in festive (and beautiful) locations around the city. You’ll find rinks in front of the Hotel de Ville, at the base of the Montparnasse tower and, perhaps most glamorous of all, one 200 feet above the ground on the first level of the Eiffel Tower.

Go to the Christmas Markets

I have always been a huge fan of Paris markets in general (the outdoor food markets and the flea markets), so it’s no surprise that you add in a heavy dose of Holiday cheer and I’ll be a happy camper at the Paris Christmas markets.

Each year at the end of November through Christmas, Paris plays host to several great Christmas markets around the city, that are not only home to some delicious holiday treats and vin chaud, but also some nice shopping opportunities. 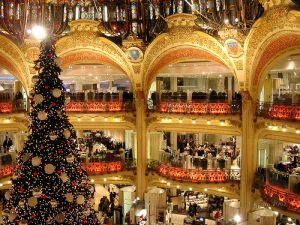 While you certainly won’t see quite the same commercial explosion of holiday cheer in France, it does not mean that the holiday is any less appreciated or celebrated in France. The Christmas season in France usually kicks off in the beginning of December and includes decorations around the city, the Christmas Markets, Christmas concerts and more.

The big event on the actual holiday is the Christmas Eve dinner, called Le Reveillon, which is usually eaten post Mass and includes traditional (and delicious) Christmas foods like oysters or escargots, turkey, foie gras and un bouche de noel cake. After dinner, shoes (not stalkings) are left for Pere Noel (Santa Claus) to fill with treats.

Like most Sundays in Paris and other major holidays, you shouldn’t plan on trying to do a whole lot in Paris on Christmas Day. Museums, shops, restaurants, pretty much everything is closed and you will find the whole city is remarkably still and sleepy.

>>Read more about Christmas in Paris and Christmas traditions in France

Of course, there are few other cities I would rather spend celebrating the coming of the New Year in Paris. From elaborate dinners to champagne toasts and fireworks, New Year’s in Paris is certainly an event surrounded by pomp and boisterous celebrations.

Later in January, there are also usually great Chinese New Year celebrations that happen around the city.

Shop at the Winter Sales

Since France mandates that there can only be two sale seasons per year—one in the Summer in late June and one in the winter in late January—shopping during one of those two sale seasons is a great time to snag up fantastic deals in many of Paris’ shops. Add on top of this the post-Christmas rush to move inventory and you’ve got the makings for some cheap stuff to be found. 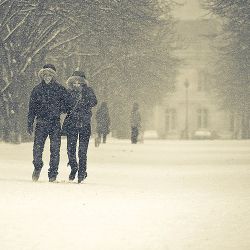 While the holiday season in Paris still sees a fair number of visitors to Paris, February and March tend to be among the quietest months. While there are fewer celebrations, festivals and special events happening during these months, it is also the best time to get deals on cheap hotels in Paris and land incredible airfare to Paris. It’s also a great time to breeze through short or non-existent lines at the museums and other attractions. This is also the time of the year when Paris is owned by the locals, giving you the perfect opportunity to live life like a Parisian for a few days or weeks.

Other useful information about traveling to Paris in the Winter:

Photos by: top photo of Saint-Germain des Pres in snow by ananyah.com , ice skating at hotel de ville by Meg Zimbeck , Christmas on Champs Elysees by Stuck in Customs , Christmas tree in Galleries Lafayette by Adam5t, walking in the snow by Gregory Bastien, winter tourists by JR Paris