What to Expect in Paris Hotel Rooms

One of the keys to avoiding disappointment when we travel is to manage our expectations properly. Visitors to Paris may expect many of the differences they’ll face, whether that’s a different language or a different sense of fashion, but if you forget that even the hotel rooms are going to be different you may be surprised when you open the door to your room.
It makes sense, if you think about it, that hotels that are in historic buildings in Paris’ city center are going to be somewhat constrained by the architecture of the building. This isn’t Las Vegas, after all – they’re not going to blow up an old building just to make room for a brand-new Hilton across the street from the Eiffel Tower. Simply by knowing what to expect from Paris hotels, then, you can avoid some of the surprise factor and get back to enjoying your vacation.
Here are some of the main things to expect from your hotel in Paris. 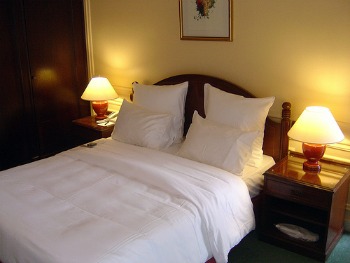 As mentioned, those historic buildings in the city center that have been turned into hotels are working with quite a few restrictions. If it’s a building that used to be a private home, it may have been cut up into bedroom-sized rooms already, but certainly not enough for a hotel. And in any case, those bedrooms didn’t have private en suite bathrooms built in.
When historic buildings are turned into hotels, the major change that has to happen (in most cases) is that a bathroom must be carved from the existing space of the bedroom. The bedrooms aren’t usually huge to begin with, and they only get smaller as a bathroom is built in. In other words, expect even starred hotels to have smaller bedrooms and bathrooms than you might be accustomed to. Hotels in the suburbs or out by airports where there’s room for new construction are more apt to have larger hotel rooms. 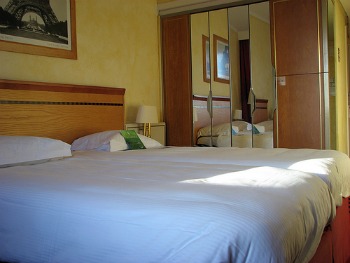 When you start with smaller hotel rooms, squeezing a king-sized bed in becomes even more challenging. As a result, the biggest bed you’re likely to find in most Paris hotels is a queen-sized bed. In many cases, the bed will look like a king but will in reality be two twins pushed together with a large bedspread covering both. This also helps the hotel owner, as they can switch the room around based on the guest’s needs.
If you find your bed is actually two beds pushed together, don’t worry too much – generally speaking, the beds are sturdy enough that they’re not going to go sliding apart in the middle of the night, letting you fall through the crack. At most, you may want to snuggle with your sweetie on one side of the bed or the other (rather than right in the middle), but you may not even notice that it’s two beds instead of just one. 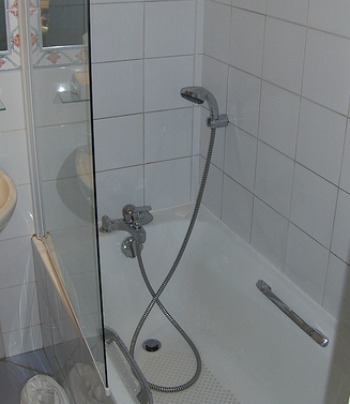 There are a few things in the bathrooms of hotels in Paris that may surprise the unsuspecting visitor: