What to Eat in Paris in the Fall: Champignons 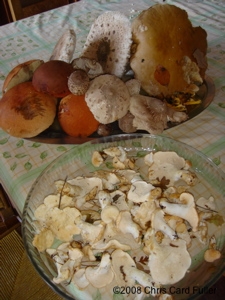 When mornings turn brisk in Paris, there’s nothing more pleasing than the scent of a ‘pot au au feu’ or pot roast simmering on the range, but the Fall season also sends us out to the countryside in search of mushrooms. If you’ve read some of Parisgirl’s travel stories, you’ll know that ‘mushrooming’ has become something of an annual tradition for this transplanted American. 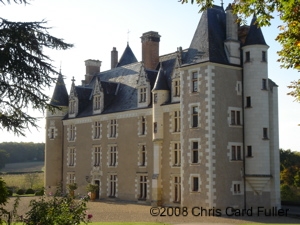 Sad to say, this year’s mushroom harvest in the Touraine region, where we normally go for a weekend foray into the domain’s forests, has not be generous. Fall, 2008 has been exceptionally warm and sunny – which is great for weekend getaways and day-trips from Paris – but hardly ideal for the kind of damp, rainy days that encourage the mushrooms to grow in quiet, shady corners of the forest.

Nevertheless, we persist – and here are some of the tasty sorts of mushrooms that you may find listed on Parisian restaurant’s menus – even if you don’t find them in the forest this season:

Cepes. There are various varieties of Cepes – one of the most common being the Cepe de Bordeaux. This big, fleshy mushroom looks like your traditional impression of a mushroom with a nice rounded top. Often cepes are served with game dishes such as rabbit or venison. If you’re not crazy about game, you can often find an omelet with ‘cepes’.

Girolles. Girolles are yellowish golden in color and shaped like fans or trumpets. The flesh is much more delicate than a cepe. Girolles taste very nice with veal.

Here are some other mushrooms that you may find in Paris’s open air markets during the Fall season.

Chanterelles. Chanterolles are delicate and golden in color and tubular like the girolles. They often can be found growing on the underside of logs or on shady slopes in the forest. This also holds true for ‘Trompettes de la mort’ or Death’s Trumpets.

Death’s trumpet is my favorite mushroom – even though the name sounds ominous, these are very edible mushrooms. They look exactly like Chanterelles, except that they are unsurprisingly totally black. Death’s trumpets have a chewy texture and go well with game or most meat dishes. You don’t need a large quantity to enjoy the flavor. Like the chanterelles, you’re most likely to find this mushroom on a well shaded slope or ditch in the forest – and once you fall upon one of death’s trumpets, you’re likely to uncover a whole colony. (Although they normally appear in late October, this year they came out much earlier in the season).

Pied de mouton. This is a mushroom that you may not find as much on restaurant menus but it’s one of the easier varieties to find (especially in the Touraine region) if you go out with friends. The pied de mouton has a lovely golden color and creamy white interior. (This is my second favorite!). It likes to hide under leaves, on a nice mossy bed beneath pine trees.

Coulemelle. When the coulemelle gets overripe, its innards get inky black. Its stem is long and skinny like a poisonous amanite mushroom. Only a band around its stem separates it from some of its poisonous cousins. This is one mushroom I’d never try to pick on my own without some help from the local pharmacist, but if you’re in the company of experienced mushroomers, the coulemelle can add substantially to your mushroom harvest for a Sunday meal. (If you ever have a question about a mushroom, take it to your local French pharmacist for a ‘thumbs up’ or ‘thumbs down’).

Because this weekend’s harvest was so slim, we combined all of our harvests into one basket: Coulemelles, pieds de mouton, and cepes to make a tasty side dish for 12 people!

If you decide to make a wild mushroom side dish ‘chez vous’:

Keep it simple. Wild mushrooms are best appreciated with a minimum of seasoning. You’ll want to be sure to clean the mushrooms carefully, cut away any green portions of the cepe (under the hood, the greenish ‘mousse’ looks almost like sytrofoam packaging). Saute your shallots until they’re golden in a separate pan. Saute your mushrooms in butter and oil until most of the moisture is cooked out. Use salt sparingly.

What to drink:
Needless to say, drinking a little wine with your mushrooms and main course is a ‘must’. You might want to explore some of France’s heartier wines to accompany these memorable meals. Over the weekend, we tried out ‘blind wine tasting’ of several wines which included a St. Joseph (a Cotes du Rhone) and Le Rouge-Bleu-Dentelle 2007, two wines that go well with ‘grillades’ or grilled meat dishes. 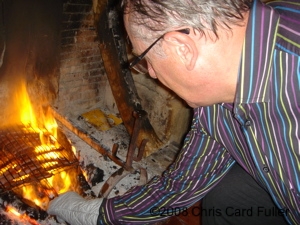 This was my first chance to taste Le Rouge-Bleu which is produced on a relatively new vineyard by the husband of one of my favorite bloggers Kristen Espinasse (French Word-a-Day). This is a wine that stands up well to our copious meal of grilled pork, sausages and mushrooms, bien sur! 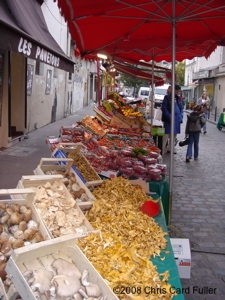 Where to find mushrooms in Paris?
Everywhere in fall. Even though, this year’s harvest was slim, the paris markets are well stocked with mushrooms. That being said, if you’re fussy, you may want to check on the origin of a market’s mushrooms. Normally, outdoor markets (as well as the supermarkets) are required to inform consumers of a product’s origin.

Where to buy Rouge-Bleu wine in Paris:

I found my bottle at Mi-Fugues, Mi-Raisin
39 Rue Delambre
Metro: Edgar Quinet (left side of Rue Delambre if you’re arriving from the Metro)

You can also find Rouge-Bleu in the US by checking out their site.