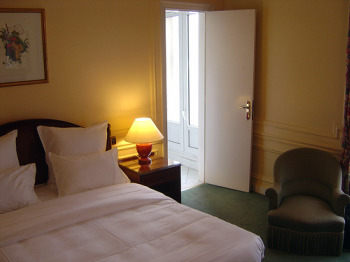 Hotels in Paris – and elsewhere in France – are graded on a star-system, and that might make you think you know what to expect from each star level. But the French star ratings are based on different criteria than the hotel rating systems in other countries. As this article on choosing a Paris hotel points out, the French hotel rating system is based on quantity – not quality. Because quality is, at least on some level, a subjective measurement, the French system has a checklist of items that they look at when rating hotels. A property achieves a certain number of stars based on how many of the criteria on that checklist are present.
As an example, a Paris blogger I know once booked a room at a French chateau that was high on the star rating system. Upon arrival, she found the reception and service so cold and unfriendly that she quickly made other accommodation arrangements. The 1-star attic-level hotel room she ended up in – overlooking a town square – turned out to be infinitely more charming, warm, and hospitable.
The maximum number of stars a hotel can receive in France is four, so looking for 5-star hotels in Paris will be a fruitless search. For most American visitors who are accustomed to mid-range hotels in the United States, looking at hotels in Paris that have at least three stars is probably a good idea. But if you’re on more of a budget, you don’t mind a smaller room, and you don’t need “extras” like WiFi or breakfast, then a 1- or 2-star may be sufficient. Just be sure to read about what each property offers.

Things to Know About Hotels in Paris