What beer can I drink in Paris? 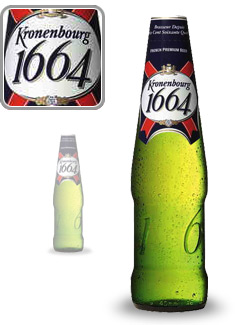 Champagne and fine wine is wonderful – if you haven’t been walking all day. When I finally did get to the Three Ducks Hostel this weekend, what I really craved was a beer.
In Paris, depending on the cafe or brasserie, you will find different beers on tap.
Kronenbourg 1664 (or une seize) is one of the more popular on-tap beers in France. It’s produced in the Alsace region to the east of Paris.
I’m not normally a beer drinker, but having been brought up Catholic, I tend to go for the monks’ beers or abbey beers when I do choose to drink beer.
Grimbergen has a little more heft than the 1664, but it’s still refreshing on a summer’s day.
(Grimbergen is produced in the Flanders region of Belgium, but it’s easily found in France).
Leffe is another ‘monks’ beer. These Belgian abbey beers go WAY back in history to the 1200s, much earlier than Kronenbourg’s 1664. Even though the French revolution put a serious damper on beer production, a good beer will always find its way out of the woods.
Abbey beers are normally served in a ‘chalice glass’ which supposedly enhances the rich flavor.
Other common beers you may encounter: Stella Artois
Kanterbrau (also produced by Kronenbourg in Alsace)
Pelforth
Fischer
Here’s the Backpacker’s beer reviews and prices for these labels: The Backpacker
If you want a light beer, you can ask for ‘une blonde’.
A ‘panache’ (pronounced panashay) is beer mixed with lemonaid. Also very refreshing for a summer drink.
If you’re asking for a beer ‘on tap’ ask for ‘une biere sous pression’.
Cafes and brasseries sell beers as well as many cafeterias. You can buy beer in grocery stores such as Monoprix and Champion.
You can buy a six-pack of Grimbergen for 4 Euros or less. At the cafe, that’s the price you’ll pay for a half pint.
Just be careful crossing the street after watching this video: