What Barack Obama Needs to See in Paris: Parislogue’s Suggested Itinerary for a US Presidential Candidate

Senator Barack Obama will be visiting with French president Nicolas Sarkozy this Friday, July 25,2008 in Paris. Republican candidate, Senator John McCain was received at the Elysees Palace for an ‘unofficial visit’ earlier this year as part of a military delegation.

As Parislogue readers know, one day in Paris is hardly enough time to appreciate this city’s layered history, but there are some points of interest that should be at the top of Obama’s ‘must-see’ list. He probably won’t be able to see all of these sites in a day and still have time for a traditional French ‘dejeuner’ at the Elysees Palace but . . . he can try. Bon courage! 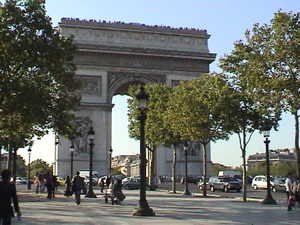 Built by Emperor Napoleon, the Arc de Triomphe was built to glorify and commemorate French battle victories. Here rests the unknown soldier and the eternal flame is relit every evening at 6:30 pm.
This is also the arch through which passed triumphant World War I American troops, specifically the US Army’s all-black 369th Regiment. The Harlem Hellfighters, The Chicago Colored Volunteers were just two of the regiments who marched along the Champs Elysees Avenue at the end of World War I.

Since the Arc de Triomphe was inaugurated in 1837, millions of Americans have climbed its steps to admire the ‘spine’ of Paris, running from the Place de la Concorde to Bastille, but for freed slaves such as Wiliam Wells Brown, the view represented a newfound sense of freedom: “You could look out over a city where you are finally free, even from bounty hunters and fugitive slave laws.”

Not as famous as Pere Lachaise where many of the world’s most famous artists, writers, and musicians are buried, the tranquil private Picpus Cemetery houses one extremely good friend to the United States : General Lafayette.

An American flag still flies over Lafayette’s grave. It’s been suggested by some that Lafayette’s contribution of ships and volunteers during the American Revolution may have tipped the balance in favor of a victory for the American colonies. Although Lafayette died peaceably, many of the other Picpus residents, including sixteen Carmelite nuns, were arbitrarily thrown into a pit after having been guillotined at the Place du Trone during the French revolution. In those days, the nearby guillotine (which had been relocated from the Place de la Concorde) was knocking off approximately 55 heads per day. After the Reign of Terror, the plot of land was subsequently purchased by an aristocrat (one of the few who hadn’t lost her head) and was kept as a burial ground for family members.

This was the one place in Paris where the American flag continued to fly throughout the Nazi occupation during World War II. 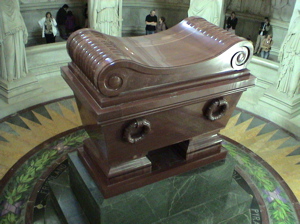 Les Invalides was originally built by Louis XIV as a military hospital. Nowadays, it houses Napoleon’s tomb as well as an enormous military history museum, Musee de l’Armee. Needless to say, Obama won’t have time to visit the entire complex, but I would recommend taking a look at military engineer Vauban’s city fortification relief maps. Twelve of Vauban’s fortifications have recently received Unesco World Heritage Site recognition. An important lesson that might be gleaned from Vauban’s military advice to King Louis XIV: “You’ve gotta give a little to get a little”. Vauban actually suggested ceding French territory in order to better defend and consolidate the nation’s borders. 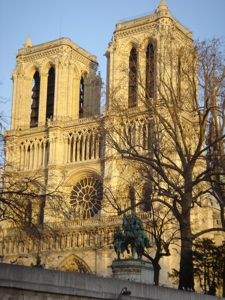 Notre Dame marks the center of Paris and the very roots of the city’s creation on the two islands of Ile de la Cite and Ile Saint Louis. After the Vatican, it’s possibly one of the most well-known Roman Catholic cathedrals in the world, but it’s also a historical landmark for some of the extraordinary events in French history. Here’s where Napoleon crowned himself emperor of France (and of whatever else he managed to conquer). Here’s where thousands recently gathered for the funeral services of Cardinal Lustiger, France’s Jewish Roman Catholic cardinal.

From an architectural point of view, Notre Dame represents one of the most beautiful expressions of religious faith wrought by human hands into an architectural masterpiece that has endured for centuries.

Memorial to the Martyrs of the Deportation

Just behind Notre Dame Cathedral, in the Square d’Ile de France on the easternmost tip of Ile de la Cite, a memorial to French citizens deported to Nazi concentration camps reminds us that the sense of freedom William Wells Brown experienced while he stood the top of the Arc de Triomphe was not the case for the 175,000 World War II French deportees, of which 11,000 were children. 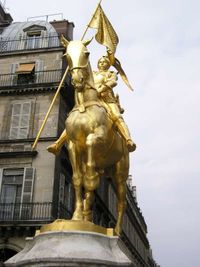 The Joan of Arc Statue was sculpted by Emmanuel Fremiet, commissioned by Napoleon III, a sister statue is located in Philadelphia, PA

Joan of Arc is the patron saint of France. She was responsible for winning decisive battles during France’s Hundred Years War with England. She brought the Dauphin Charles VII to Reims where he was crowned King of France. Her faith and determination to drive the English out of France inspired the king and French soldiers to defend their nation.

IM Pei Pyramid at the Louvre

Amid much controversy, the IM Pei design for a pyramid allowing a dramatic entrance into the Louvre museum was approved during the Francois Mitterand presidency. The contributions of a Chinese born-American I.M. Pei and Irish architect Peter Rice to a palace which originally was conceived by Philippe August as a military fortification is a great symbol of how the world is capable of evolving from defensive walls to welcome mats. France continues to open its arms to world talents when it comes to adding to the city’s most famous landmarks.

It’s just a street that’s been around for a long time – since the Romans. So what’s the big deal? Francois Miron deserves a nod of recognition. He was an adviser to King Henry IV. It was Miron who suggested to the king that aristocrats and commoners should live side by side. Consequently King Henry IV constructed Place de Vosges where he would ostensibly live when he was in Paris. A number of Paris constructions including the Louvre Palace were meant to be royal residences in Paris (even though the early kings rarely remained in Paris for any substantial time). The message here – might be – avoid the snare of viewing the world through rose-or blue-colored lenses from the top of the Eiffel Tower.

American Cathedral and the American Church in Paris.

Neither the American Cathedal or the American Church of Paris newcomers. Both churches have been operating since the late-1800s. The American Cathedral was consecrated on November 25, 1886, the same day that the Statue of Liberty was inaugurated in New York City. (It’s role in past French/American relations includes the assistance of Church member Dr. Thomas Evans who helped the Empress Eugenie, wife of Napoleon III, escape to England during the Franco-Prussian war)
The American church, a non-denominational place of worship likes to refer to itself as ‘God’s United Nations’. Its global missions include Habitat for Humanity, missions in Ghana, Open House which brings Israeli and Palestinian children together, Association of Christians against Torture, to name a few. 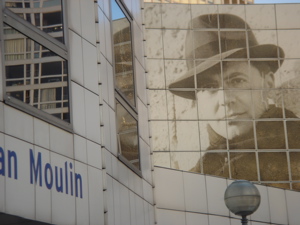 Nearby, just off of Rue Depart, one can find Place Josephine Baker. This isn’t much of a landmark – but it’s a start. The square isn’t far from the venue of Baker’s last performance (at Bobino on Rue de la Gaite.

1920s Singer, dancer, and movie actress Josephine Baker took Paris by storm when she performed in the Casino de Paris, and later on, the Folies Bergeres. Eventually, she became a French citizen. Because of her contributions as a resistance fighter in World War II, she was the first woman to receive France’s highest military honor, the Croix de Guerrefor her service to France. She smuggled coded messages out of France to Portugal on her sheet music. (This did not stop creditors from physically expelling her from her Chateau Millandes when she failed to get the last payment registered in time).

The newly created immigration museum replaces the Oceanic and African arts museum which was dismantled and melded with the Musee du Quai Branly collection. In its place, the immigration museum gives a home to the story of immigrants coming to France. The current exhibit focuses on immigrants of the 1930s. 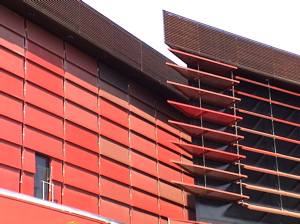 The Musee du Quai Branly, inaugurated by former president Jaques Chirac highlights African, Oceanic, Amerindian and Asian arts. Architect Jean Nouvel designed the museum building and its gardens. This would be the ideal place to wrap up the day with the 7 pm free garden concert.

Emmanuel Dilhac is the artist/musician ‘who makes stones sing’. His concert Woolloo Belou invites spectators to ‘share in his discovery of the prehistoric sound’.

Finish up with dinner at Fouquet’s Restaurant on the Champs Elysees – where Life Magazine fashion photographer Gordon Parks used to hang out. 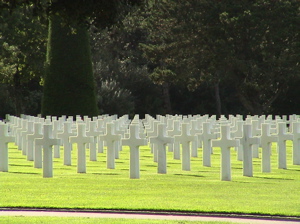 Finally, a day trip to the American Cemetery at Colleville in Normandy, is most important – to remember those Americans as well as all the Allied soldiers who sacrificed their lives to make France a free nation. For those of us who can visit France nowadays under peaceful conditions, may we never forget that peace is a privilege to be cherished – and never taken for granted.

P.S. Barack Obama admitted that his visit to Paris was too short (he actually only stayed long enough to meet with President Sarkozy at the Elysee Palace).