Welcome to Paris: Are you lost? 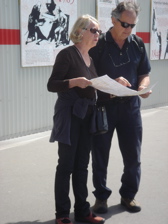 Photo by Chris Card Fuller ©2008
The sun is shining brightly here on the third day of May – and everywhere I look- visitors are studying their maps. If you are lost, don’t feel bad. Everybody gets lost in Paris – even Parisians. I have one word of advice – go to a newstand, kiosque or bookstore such as FNAC and buy a copy of the Plan de Paris (par Arrondissement et Communes de Banlieue).
I’ve mentioned this in past posts, but it never hurts repeating. The Plan is better than most maps (you’ll normally get a free map at your hotel or when you rent a car, but it won’t have all the details of the Plan de Paris). This is a book you can take home with you and bring back with you every time you return to Paris. I still have an old copy from the 1970s which looks like it was bought yesterday. 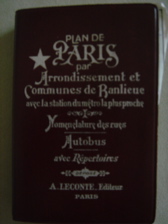 The Plan de Paris can be bought at FNAC for all of 7.32 Euros which is a real bargain considering how many times it will save you from getting lost over several decades. (While in FNAC you can also buy your Louvre museum tickets t the same time at their ticket Kiosque)
Above all, don’t be embarrassed about getting lost – and don’t let it stop you from exploring. The couple in the above photo hail from Australia. I was really happy to be able to help them find what they were looking for – the Louvre Museum. After saying goodbye to them before they crossed Rue du Rivoli headed toward the Tuileries Gardens and the Carrousel du Louvre – I proceeded to get lost. That’s because I had left my Plan de Paris back at the apartment.

More tips on not getting lost: 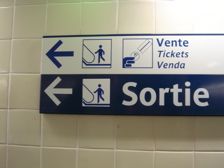 A handy sign to remember is SORTIE. This means EXIT.
Before descending, or ascending to each subway ramp, you’ll find a sign posting the name of the final destination for that direction. The name at the top of the list is the name of the station from which you start your trip. If you don’t see the name of the Metro stop where you’re headed, that probably means that you’ve taken the opposite ramp from the one you need. 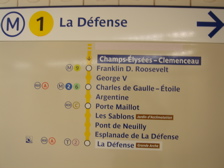 On Paris streets
Most Paris streets have street signs which are posted on the side of buildings, usually at or near major intersections. You’ll see underneath the street sign, it will also list the name of the arrondissement you’re in. The lower the number of the arrondissement, the closer you are to the center of Paris.
Streets numbers are usually posted – pair (even numbers) on one side, impair (odd numbers) on the opposite side.
Streets are rarely laid out in a grid-like format. Some streets may be broken up in strange ways. Avenue du Maine in the 14th is a very good example of that. Half of Avenue du Maine is located on one side of Gare Montparnasse and the other half is on the opposite side. There’s no way you can know that – unless you have your trusty Plan de Paris.
By the way, I never did find the Passage Panorama today (even though I’ve already been there). Without a map, the Right Bank can be really confusing for a Left Banker. Hope my new Australian friends had better luck getting to the Louvre. Just to be philosophical about getting lost in Paris, it really doesn’t matter where you walk. You’ll find something wonderful or make friends along the way.
Here’s a tip from the Australian visitors. They rented an apartment for a week via the internet – and they couldn’t have been more delighted with the location – the 16th arrondissement (Right Bank).