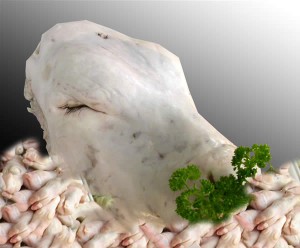 (Photo from Restaurant Moncourrier, Avenue Gambetta, Ussel/Correze)
French chefs are world famous for their mastery of sauces, desserts and their ingenious presentation, but French cooking can also offer up some surprising dishes that you may prefer to eat first and before learning the names of the animals and their organs. Here are just a few:
Tete de Veau (Calf’s Head)
This one takes the cake for originality. It’s one of former president Jacque Chirac’s favorite dishes. Tete de Veau is a regional specialty but you can find it in certain Parisian restaurants and bistros such as Le Rubis or Le Vaudeville (see restaurant information at the bottom of the page).
Smoked Ox Tongue
Known as ‘Langue Lucullus’ stuffed with foie gras, is one of the plates (along with Tete de Veau and frog legs which can be tried at Benoit.
Tripe (veal belly) – French soul food
This can be really tasty when served up with boiled potatoes. You want to make sure the chef is competent. Tripe needs to be prepared in pristine conditions.
Ris de Veau (sweetbreads AKA calf’s pancreas)
This is an item that used to be common on menus in fine US restaurants up until the early seventies. Nowadays pancreas has been requisitioned by medical labs.
Perdrix (Partridge)
What better way to celebrate Christmas than devouring one of these birds that’s been lured out of its pear tree?
Pintade (Guinea Fowl)
Pintade often replaces turkey as the festive fowl for holidays. Or you can have sautéed pintade for less formal occasions. Even if it isn’t a holiday, you may find guinea fowl on some menus including the Ambassade d’Auvergne.
Pigeon
You’ll find pigeon on many fine restaurants’ menus, ie Les Bouchons du 5eme. (No, these aren’t Paris pigeons).
Pigs’ feet i.e. Trotters, Pig’s snout, Pig’s cheek
If you’re a fan of pig parts, you need go no further than the famed restaurant,
Au Pied du Cochon in Paris’ Centre Pompidou neighborhood. Here you can find just about every part of the pig you’d want to taste.
Boudin Noir (Blood sausage or blood pudding)
Ever since I first had blood pudding for an Irish breakfast, I’m a a fan of this dish. In France, boudin noir is often serviced with diced potatoes, onions and sometimes bits of apple.
Bulots
You’ll find these little rubbery critters on every seafood platter alongside the crayfish, the shrimp and the crab. They look like snails and you coax them out of their tiny shells with a toothpick sized utensil. The English word for this shell-dweller is winkle.
Frog’s Legs
In spite of their fame, these are not often found on Parisian menus these days. If you do find them, try them. Lightly sautéed, frog legs – taste like chicken. One place that serves frog legs (as well as ris-de-veau) is L’Escargot Montorgueil. And, of course, they also serve up the final weird food on our list – escargots.
Escargot – snails

Snails are often served as a starter course, more often served nowadays outside of their shell in a rich sauce that you can lap up with a crust of bread (and the chef will forgive you this impolite table manner (because you’re showing appreciation for his sauce).
My English neighbors are quick to point out that there’s nothing weird whatsoever about trotters (i.e. pig’s feet), just as there’s nothing weird about chitlins or tripe if that’s what you’ve grown up eating. However, for those of us who’ve grown up on Kraft macaroni and cheese, Swanson frozen dinners and roast beef and baked potatoes on Sunday night, simmered pig’s cheek seems oceans away from pigs-in-a- blanket.
During your stay in Paris, if you have an opportunity to try just one of these specialties, have yourself a food adventure. You may be pleasantly surprised.
Parisgirl’s favorites:
Ris-de-Veau
Boudin Noir
Escargot

Restaurants mentioned above where you can find these unusual dishes