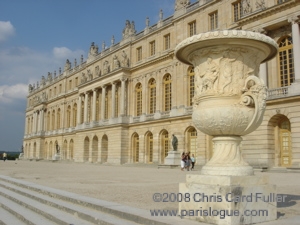 No matter how many times we visit the Chateau de Versailles, I’m continually dumbstruck by the sheer mass of this palace, home to France’s most illustrious king – the ‘Sun King’ Louis XIV. He chucked his palace in Paris – The Louvre, and the neighboring Palais Royal – to live full time at Versailles in 1682 – and he never looked back. Only 12 miles away, Paris could have been across two oceans, for all he cared. 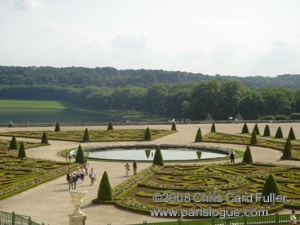 To say Versailles is big would be the understatement of the millennium. What started off as a modest hunting lodge used by King Louis’s dad – Louis XIII, evolved into a theme park complex including formal gardens, canals, hunting grounds, a zoo, mazes, covering 19,262 acres. When you take into consideration that the Versailles grounds were larger than either the city of Paris or Manhattan Island, you begin to understand what I mean by BIG. It cost him at least 2 billion dollars in present-day terms to build – and the cost of restoring and maintaining this behemoth has been an ongoing affair for the past three hundred plus years. 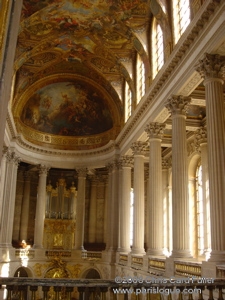 Call it a king’s Sim City, Club Med or the ultimate Love Boat, Versailles was, in reality, the most sumptuous of prisons, where regardless of your status, from the lowliest of servants to the highest of nobility nobody was free to leave without the king’s permission. That was, unless you happened to be a tourist. Even from its earliest days, the ‘public’ had a surprising amount of free access to the chateau’s state rooms. Commoners needed only to rent a coat and sword at the front gate in order to traipse through the gardens. Then, maybe knick a plumbing fixture here and there in the chateau or take a wee in one of the stairwells. 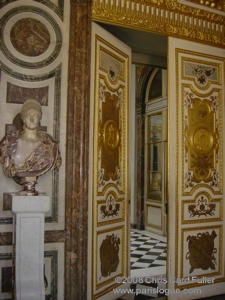 At any given time, 5000 nobles sojourned here. 7000 servants worked here in exchange for room and board, 4000 Swiss and French guards patrolled on foot and 4000 guards on horseback were added for good measure. Seven hundred horses were boarded in the royal stables (and even more arrived with King Louis’s successors).

So, with all of this build-up and hyperbole, it’s easy to understand why Versailles is one of the most visited palaces in France – and in the world. But, it can also be a disappointment. What I mean by this, Louis isn’t there.
To some readers, this may be no surprise. After all, he had a good run of 72 years, but he died in 1715. When I say that Louis isn’t there, Louis’s spirit isn’t there – or definitely not apparent, unless you’ve done your homework. For all of the beauty of the palace’s staterooms, culminating in the resplendent Hall of Mirrors, one feels as if one is walking through an exquisite tortoise shell. Meanwhile the actual tortoise has crawled away into the woods. 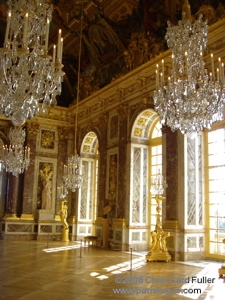 That’s why I would suggest the following:

Read as much as you can about Louis XIV’s court life before visiting. The more you get to know about the daily lives of those who inhabited these luxurious salons, the more you’ll grasp its grandeur.

Allow yourself ample time to absorb the palace atmosphere by arriving very early. If you can’t make it early in the am, opt for a late afternoon visit and enjoy the gardens minus the crowds. The gardens are open throughout the Fall and Winter season and can be extremely pleasant on a brisk winter day.

Either sign up for a guided tour or the excellent audio tour (which will allow the opportunity to visit the private apartments).

Plan on a minimum of an hour to walk through the gardens (if you arrive early in the morning). Skip the smaller palaces – the Petit and the Grand Trianon for your first visit to Versailles, but do seek out Marie Antoinette’s country house and garden ‘Le Hameau’. (Both of these palaces deserve a separate day’s visit. It’s too overwhelming to visit the main chateau and the Trianons in one day.

Good books and articles to read before you go:

The Sun King by Nancy Mitford, Harper & Row, 1966 (This is one of my favorites!)
(Nancy Mitford also wrote an exceptional book on Madame de Pompadour, Louis XV’s mistress)

Versailles and the Court Under Louis XIV by James Farmer, New York: The Century Company, 1905

The Affair of the Poisons by Anne Somerset – court intrigue at its most diabolical!