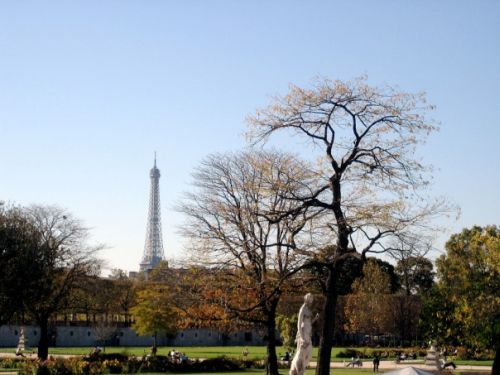 The Tuileries Garden (or Jardin des Tuileries en francais), located on Paris’s Right Bank is bordered by the Louvre on one side, the Orangerie and Jeu de Paume on the other (of French Revolution fame), and the impressionist Musee d’Orsay is just across the Seine River, making it the perfect place to soothe your sore feet in between museum treks, or simply relax, people watch and enjoy the beauty of Paris.

The Tuileries Gardens: The Spine of Paris

The Tuileries Palace stood by gardens until it was destroyed 1871, when it was destroyed in the upheaval surrounding the suppression of the Paris Commune. Closing off the western end of the Louvre courtyard, the gardens were the only thing to remain after the palace was destroyed, leaving the space once occupied by the palace open and the courtyard un-closed off like it had been for hundreds of years.

If you stand in the center of the Tuileries Garden, you can try to locate ‘the spine’ of Paris: In one direction, you should be able to see all the way down the Champs Elysees to the Arc de Triomphe. Beyond the Arc, lies Francois Mitterand’s legacy, the Grand Arch in La Defense. In the opposite direction, you can try lining up the Carrousel du Louvre (a miniature version of the Arc de Triomphe), the IM Pei’s pyramid – and much farther away (and not to be seen from ground level), La Bastille (the actual Bastille no longer exists – it was demolished during the French revolution) and the July Column takes its place.

>>Want to know more about the falling of the Bastille? Read about Bastille Day

About the Tuileries Garden

The Tuileries gardens have a multi-dimensional personality. At first glance, you might too quickly pigeonhole this park as being a typical example of a formal French garden. Designed by Andre Le Notre (the same man who designed the gardens at Versailles), the Tuileries has many characteristics common in French royal gardens–with its carefully delineated rows of tulip beds, it’s broad walkways, and the round reflecting pools.

However, the introduction of the Maillol sculptures in 20th century along with many other surprising sculptures in unexpected places, make the Tuileries gardens more interesting an unique than many other royal gardens. There is also a summer amusement park facing Rue de Rivoli, complete with a Ferris wheel.

Before the Tuileries Palace was burned to the ground, this area was the stomping grounds of royalty – and for a brief time during the French Revolution, it was a sort of outdoor cage for the royal family before they were sent to prison and eventually beheaded.

Even though the Tuileries palace was burned down long after the French Revolution (in the 1870s during the rule of the Commune), the vehemence toward symbols of privilege had hardly abated. The famous tennis courts that once sat here are considered to be the birthplace of the French Revolution.

Today, the Galerie nationale du Jeu de Paume is a museum of contemporary art. The museum once held many of the famous impressionist paintings, which are now held in the nearby Musse d’Orsay.

Keep in mind that if you arrive at high noon on a summer’s day, you’ll be happy you brought a hat and shades. The soft light of spring and fall can be the best time to catch some great shots in this park – or a snack at the park cafe shaded by trees – or a late afternoon snooze around the reflecting pool.

On sunny days you will often find children sailing homemade sailboats in the reflecting pool here.

Eating near the Tuileries

In good weather, you can lunch outdoors. The park cafe operates even in cool weather, offering a ‘vin chaud’ or hot wine to take off the chill of a winter’s day.

You can also stock up on your own favorite food items (and go food shopping in France) and bring a picnic with you to the park.