Traveling with your cat or dog to Paris 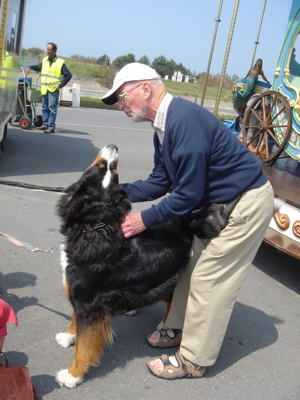 Bringing your cat or dog to France is much less of a hassle than many other countries. In fact, living a dog’s life in Paris can be pretty luxurious, so if you bring your dog for a two week vacation, don’t expect he or she will return willingly – what? More security checks! No way.

If you’re considering bringing a pet to France, there are a few basic requirements – rabies shots for cats and dogs between one year – and one month before departure. You’ll also need to take your pet for a check up with the vet not sooner than a week
before departure.

Rabies Shots
The most important chore is to get your dog or cat’s rabies shots. Keep in mind that if it’s your pet’s first rabies shot, you’ll need to wait 21 days between the last shot of the vaccination protocol and departure.
For animals that have already had rabies shots, you’ll want to bring its shots up to date. Ask the vet for a vaccination certificate.

Although European cats and dogs now have pet passports, US pets will be expected to have a microchip (standard ISO 11784 or annex A ISO standard 11785) or a tatoo. If the microchip’s standard is different, you must bring your own scanner in order to read the microchip. Microchips can be purchased at pet stores such as pettravelstore.com but you’ll need to have your veterinarian implant it.

France allows you to bring up to 3 dogs or cats, but only one puppy or kitten from 3-6 months old. Unlike some countries (Indonesia, for example) there’s no quarantine. Once you’ve picked up your pet and your luggage, you can head straight for customs. Have the necessary documents available if they ask for them (the health certifications should be written in French as well as English).

You may be surprised, as we were when brought a cat through customs, that the customs agents didn’t even bother looking at the medical reports. After we had gone to so much effort to make sure we had all the necessary papers, they sent us straight through. Probably the worst part of a voyage with animals is going through the security checkpoints (if your cat or dog is small enough to go with you in the cabin).

Keeping track of your pet

Most dogs in France have two forms of ‘tatouage’ or tattoo. The ear tattoo provides all the necessarily information to reunite a dog with its owner – or the ‘puce’ is an computer chip which services the same purpose.

If you’re coming from England to France, keep in mind that the ‘tatouage’ system in France doesn’t necessarily have immediate access to the English tracking system. If you loose your dog, time is always of the essence so you’ll want to add get your dog (or cat) registered in the French computer system. An identifying dog tag lets people know automatically that he or she isn’t a stray. 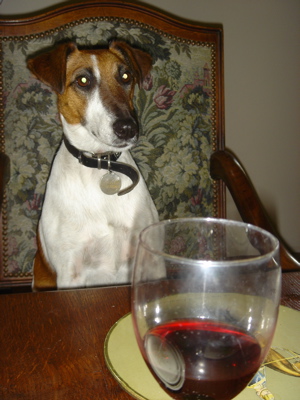 Dogs are welcome in many Paris cafes and even restaurants if they are well-behaved. Remember that when you walk your dogs in Paris, you should curb your dogs and pick up after them (just like at home).

If you should lose your dog during your trip, you should contact the Mairie of your arrondissement (town hall). Stray dogs can also end up at a ‘refuge’. If you’re traveling outside Paris in the countryside, remember this trick ( for humans, not for lost dogs). Go outside around midnight and call out your dog’s name. This is really good advice, especially if you’re in high traffic areas. At midnight or after midnight, sound travels better, and if your dog is lost, he has a better chance of hearing your voice.

Pet passports. European pets now can get passports. If you plan on visiting other countries, particularly England, you should know that some of the rulings vary from country to country. While it’s quite simple to fly into Paris with a dog, England will probably demand more documentation and will be more rigorous.

For more information about traveling with animals to France, you should also contact the airline you intend to use. Very few airlines allow cats or dogs in the cabin with passengers. When we traveled with a cat, Air France was still allowing small cats or dogs to travel in the cabin if they could be stowed under your seat. You’ll still have to take your pet out of its carry-on when you go through security.

When you get to Paris

When you’re in Paris, you’ll probably want to take your pet to some Paris parks. Parc Buttes Chaumont and Parc Montsouris both allow dogs. These parks have twisting roads and plenty of slopes so your pal can get a good day’s workout.

Having a dog in Paris is a great way to meet people. Parisians love dogs – more than babies even. When I aupaired for two one-year olds, people always stopped to look at the adorable terrier, not the kids.