Train Tickets & Rail Passes in Paris: What to Know 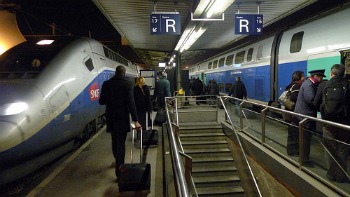 Train travel is so common throughout Europe, and the term “Eurail Pass” is so familiar to most people, that you may not realize exactly what such a pass is – or understand that you can’t get just buy such a pass at any train station in Europe once you get there.
Here’s some information to help you learn a little bit more about train tickets vs. rail passes for your Paris trip.
Further reading: Train Travel in France

What’s the difference between a rail pass and a train ticket in France?

A rail pass, such as a Eurail Pass, is something you purchase before leaving home and it essentially acts as your ticket for the trains in France. The only time you’ll pay an additional fee for a train trip if you already have a rail pass is if you want to ride the high-speed TGV train.
You can buy individual city-to-city train tickets as you travel through France, or you can buy a rail pass beforehand that has a certain number of travel days on it. If you’re using individual tickets, you have to validate each one before you board your train. If you’re using a rail pass, you need to get it validated before your first train trip – after that, you just need to write in the date yourself before the conductor stamps it.

Where can I buy a rail pass in Paris?

Although there are some train stations in Paris (and elsewhere in Europe) with what are called “Eurail Aid Offices” to provide assistance with Eurail Passes, most of the Eurail Passes available for sale in Europe don’t include France. Some Eurail Passes can be purchased in Europe at some Eurail Aid Offices, but the only ones that include France are the “Global” passes, which cover all Eurail countries, or “Select” passes, which cover 3-5 bordering countries. In other words, if you’re only traveling through France you’ll be getting much more rail pass than you really need.
Buying a rail pass in Paris will also typically cost more than if you purchase a pass before you leave home, so it’s definitely worth checking out the prices of the various pass options that suit your trip to see if a pass will save you money over individual tickets.

What if I’m a resident of Europe, can I still get a Eurail Pass?

European residents aren’t eligible to get a Eurail Pass, but there’s another pass you can use – it’s called an InterRail Pass. InterRail Passes are very similar to Eurail Passes – there are several options depending on where and for how long you’ll be traveling.
The biggest difference between the InterRail and Eurail Passes is the number of countries in which each is valid (InterRail is valid in 30, while the Eurail is only valid in 22). France is included in both.

So, just where are those Eurail Aid Offices in Paris?

Not surprisingly, Eurail Aid Offices are almost always in train stations. Here are the locations for the Paris offices, including one at Charles de Gaulle Airport: