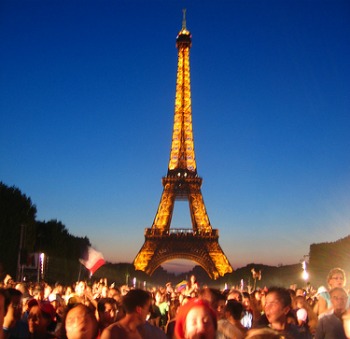 They’re sweeping away the remnants of another July 4th in communities around the United States this week, but in the French capital they’re still planning the show. If you’ve never seen Paris when it’s celebrating Bastille Day, then you’re missing out – because, let’s face it, there’s nothing quite like the Eiffel Tower when it comes to a launching-point for fireworks.
There are lots of places to celebrate if you’re planning to visit other cities in France in July, of course, but there’s nothing quite like Bastille Day in Paris. It’s one of the few days each year when the city’s most grand boulevard, the Champs Elysees, is closed to traffic. In this case, it’s for the huge military parade early in the day. France’s tricolor flag is everywhere, and the streets are decorated with its colors – people line the parade route quite early, but you can usually find a place to see at least a little of the spectacle even if you don’t want to camp out before breakfast.
The evening on Bastille Day is, for many, the best part – because that’s when they start the fireworks display off the Eiffel Tower. It’s a glorious backdrop to a fantastic pyrotechnic show, and just a cursory glance at a Google image search for Bastille Day fireworks will confirm that.
Summer is a busy time to travel in Paris already, so the fact that the nation’s biggest holiday falls right in the middle of July doesn’t help. It’s difficult enough to find a reasonably priced hotel in Paris – throw in the fact that you’re competing for those rooms with French people from the surrounding area who want to be in Paris for the party, and you’ve got yet another reason to do your research and book well in advance.
When we travel, it’s always a good idea to be prepared to abandon your previously laid plans and take advantage of a local festival or celebration – and it’s understandable for anyone who’s not French to not know when Bastille Day is. Just know that if you’re anywhere in France on July 14th, let yourself get caught up in the holiday. It’s lots of fun, and it’s those sorts of serendipitous moments that make travel so special.
photo by activefree