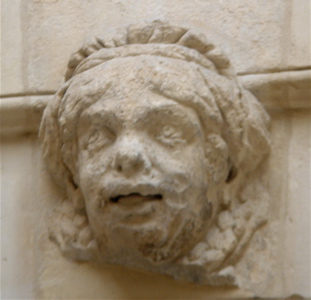 Photos by Chris Card Fuller ©2008
How did an untitled woman, married to a merchant, end up in the 16 year old king’s bed? Catherine Bellier, handmaiden to Queen Anne of Austria, Louis XIV’s mother, was assigned the responsibility of relieving the young king of his virginity at the bequest of his mother. 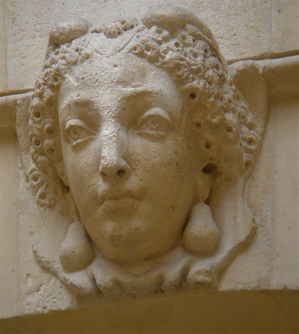 Amazingly, Catherine Bellier was extremely ugly. She was nicknamed ‘One-Eyed’ Caton. It was specifically because of her ugliness that she had access to the king’s private chambers without raising suspicions of any ‘hanky panky’.
Some historians argue that the queen’s confidante did not have this ‘privilege’, however, curiously Catherine Bellier ended up being ennobled with the title of Baroness de Beauvais. She obviously must have done something spectacular to gain the queen’s favor.
Queen Anne provided her with the stones that would help Baroness de Beauvais and her husband build an elegant townhouse at 68 Rue Francois Miron designed by the architect LePautre. To this day, the sculpted stone faces of the major ‘players’ in this royal story decorate the courtyard walls: Queen Anne’s attractive, well proportioned face contrast starkly with One-Eyed Catherine, however the complicity between these two women to assure France a king with an heir gave them a common goal. If you’re wondering why a mother would impose such an ugly woman on her son, Queen Anne’s own experience as a young bride may explain her motivation. Louis’s father, Louis XIII was not a rocket scientist when it came to the basics of procreating. It took fifteen years of marriage before he sired a child for Queen Anne. Apparently it didn’t occur to him that a good start would be to sleep in the same bed. Only after getting caught in a thunderstorm, during a hunting expedition, and allowing the queen to strip off his wet clothes, then share her bed for the night, did this king finally gain some carnal wisdom. Happily for the wedding day of her son, Queen Anne could rest assured that the future bride would not have such a long wait. 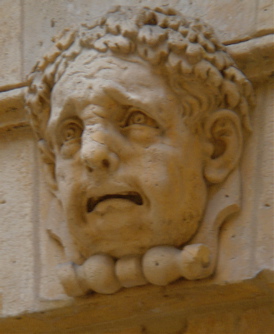 As for the Baron of Beauvais, his face is also immortalized on the townhouse courtyard wall. His countenance is harried and less than ‘heureux’ i.e. happy. One-eyed or not, Catherine continued to attract plenty of amorous attention during her life at the Beauvais townhouse (in addition to plenty of debts). All which proves, you don’t have to be a raving beauty in France to garner a bevy of lovers.
Rare at the time, the Beauvais townhouse (referred to as a hotel particulier in French) featured a balcony from which the Queen along with the Baroness and Baron de Beauvais would one day watch Louis XIV’s wedding parade wind its way along Rue Francois Miron toward the Louvre palace.
Although the Hotel Beauvais is not open to the public, you can appreciate some of the Baroque workmanship apparent in its original wood carved doors and perhaps catch a glimpse of the ingenuously proportioned courtyard – designed in the shape of a violin. 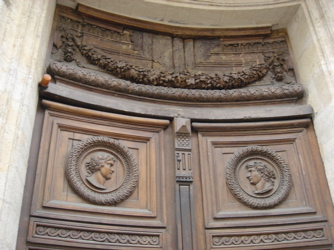 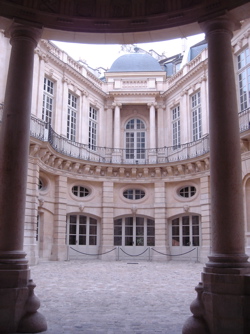 Architect Lepautre achieved an illusion of space by pulling one’s focus toward the townhouse’s center and its ornate upper levels. His ingenuities include two well rendered staircases – one entrance for VIPS with ornate stone frieze work and the second entrance constructed to allow a maximum of light for de Beauvais’s more discreet entrance (perhaps for those who preferred to to be noticed). One of the rare vestiges of medieval cellars can be found underneath the townhouse. These have been restored. 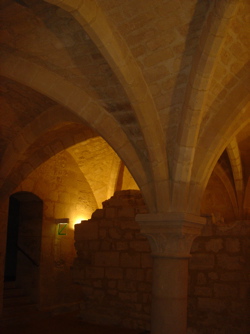 Sculpted animals including the Goat adorn the courtyard walls. Catherine de Beauvais’s first name ‘Bellier’ means goat. One has to wonder how much one’s name has an influence on one’s role in life.
The Hotel de Beauvais can only be visited with accredited guides. If you read Parislogue regularly, visiting dates are posted in the ‘News’ section. Visits to townhouses such as Hotel de Beauvais on the Right Bank and Hotel de Lauzun are conducted only a few times throughout the year. If you are interested in attending, contact Parislogue by e-mail for more details.
About the photos:
The first three photos are ‘mascarons’. These are satirical representations of well-known people in their day that were often portrayed on building facades. The first image supposedly represents the Baroness de Beauvais (you’ll note that one eye is slightly askew). The second mascaron represents Queen Anne of Austria and the final unhappy fellow could well be the Baron de Beauvais.
Hotel Beauvais
68 Rue Francois Miron
Metro: Hotel de Ville