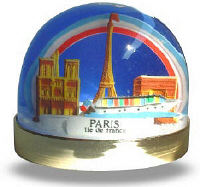 I should say at the top of this post that I do, in fact, own an Eiffel Tower souvenir. I bought it during my first trip to Paris, and it’s one of those little replicas of the tower. It’s essentially useless, other than as a dust-collector, although it does remind me of that trip whenever I look at it. Still, though I could be considered biased for saying so, I don’t think it’s a particularly tacky Paris souvenir – especially compared with some of these, what I’m dubbing the tackiest Eiffel Tower souvenirs ever. 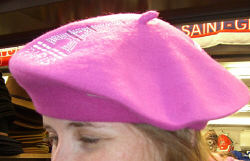 I kind of think that any beret purchased on a whim in Paris, regardless of whether it has an iron-on Eiffel Tower or not, is potentially a tacky souvenir. I mean, how many people actually wear them when they get home? If you wear yours, more power to ya. If you don’t, then this souvenir falls squarely in the tacky column. Try one on in the market and take a funny picture of yourself, but don’t buy one. 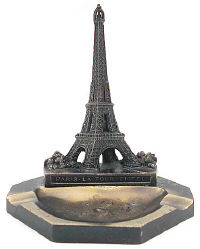 I’m not a smoker, so it’s unfair for me to judge Eiffel Tower ashtrays on their usefulness. So I won’t do that – but I will judge them as tacky, regardless of how useful they might actually be. The tower is a beautiful architecutral monument and the symbol of one of the world’s great cities… And you’re going to crush out a cigarette on it? That’s seriously how you want to honor the memory of your trip to Paris? Yikes, I don’t think so.

Okay, I realize that some people collect these souvenir spoon things, and I’ve seen them displayed in people’s houses since I was a kid. But even back then, I didn’t get it. If they’re utensils, why aren’t you using them? And if they’re souvenirs, why do they look like spoons? This remains one of life’s great mysteries to me. 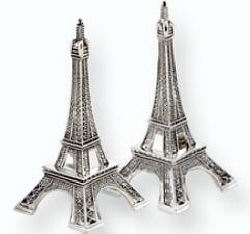 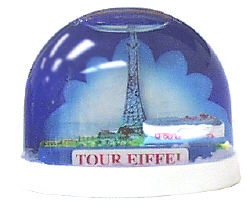 These are tacky on a level that makes them almost cool. Note I said “almost.” And even though there are different levels of snowglobes, I’m fully prepared to declare all of the Paris snowglobes I’ve seen as tacky. The snow globe may, in fact, be the tackiest souvenir of all time, regardless of where it’s from, and cramming a tiny plastic image of the Eiffel Tower into a crappy plastic snow globe and selling it for actual money that people have worked hard to earn just makes the whole thing worse. Please don’t encourage the snow globe vendors by buying them.

The Mini Eiffel Tower
I know, I know – I said I had one of these, and that it wasn’t tacky. And I’m sticking by that. But there’s a line which shouldn’t be crossed when it comes to these miniature models of the Eiffel Tower, and that line is lights. Yes, the tower itself is spectacular at night when it’s all lit up. But that cheap plastic model with fiber-optic lights that sits on your mantel just doesn’t have the same grandeur, I think you’ll agree. And for perhaps one of the worst Eiffel Tower models I’ve ever seen, check out this picture. If the tower were a living thing that was now dead, it would be rolling over in its grave at the mere sight of that atrocity…
What are the tackiest Eiffel Tower souvenirs you’ve seen?