The Romance of Trains 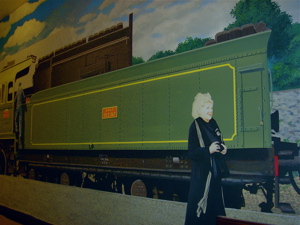 Photo by Chris Card Fuller 2008
If you asked me where the most romantic place was in Paris, I would have to say the train station, especially on a Sunday night. Unlike travel by plane where travelers are separated from their loved ones either at a curbside drop-off or in a dismal parking lot, in Paris, couples cling to one another until the last possible moment. It’s impossible not to be touched by the electric sparks of passion that transform an otherwise grayish, impersonal train station such as Montparnasse into a veritable sighing, pulsating embrace.
We were accompanying our friend Huguette who would catch her train back to Rennes after her weekend with us in Paris. The fun part of accompanying a friend to the train station is being able to imagine that we’re also part of the trip even if we only go as far as helping Huguette get situated in her compartment – and wave to her from the platform.
Just by joining in the throng, one absorbs some of the emotions, the regrets of a weekend that passed too quickly, the anxiety of going back to the classroom, back to a job that is less than fulfilling, back to the responsibilities of maintaining a home – the leaky faucets, the garden that needs attention, back to less than understanding parents, or a sloppy roommate. One can weave a zillion stories around trains. They are a vestige of a romantic era – invented in the 19th-century, all but obliterated by cars and planes in some parts of the world, but still the ideal solution for intercity travel in France and elsewhere in Europe.
With Huguette, we lamented some of the lost traditions of rural France such as the veillé, simply explained as a gathering of neighbors during the winter months over a glass of hot cider or mulled wine to pass a winter’s night.
“Well, television’s changed all that,” Huguette said. And now, finally, France’s push to stimulate consumerism has won the right to keep shops open on Sundays. From a tourist’s point of view, that might make good sense, but Sunday for decades upon decades has been the one day out of the week reserved for families. A day of rest, not a day to shop. A day for grandparents and grandchildren to establish bonds that will last throughout their lifetime. A day for a hearty home-cooked meal.
Thanks to invitations from school friends at the Paris university, I came to love those Sunday meals – and the tradition also was upheld back in Rochester where my Italian American roommate’s grandmother insisted we stop by Sundays for spaghetti and meatballs. Dani’s grandmother would chide us for not wearing bras “You look like cows!” she’d scold – and we’d laugh and ignore her well-intentioned advice.
The truth is money, speed and technology finish by separating people. So, when you are feeling alone and isolated from friends and family, maybe it’s time to slow down, park the car, and take the train instead of the plane.
Train travel in France is easy. Most train stations in France have automatic train ticket vending machines. You can reserve your seats with a credit card (be sure to know your four-digit code). 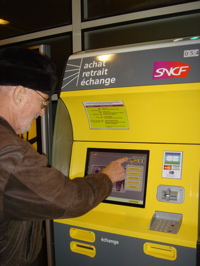 Before boarding a train, be sure to stamp your train ticket at one of the yellow ticket-stampers. The expression is ‘composter le billet’ or ‘stamp your ticket’.