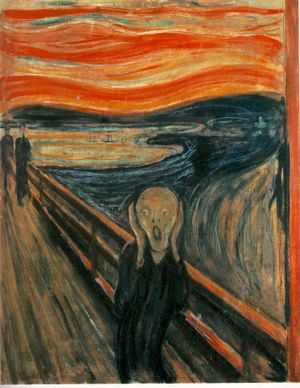 Last week, Francois Hauter reported on ‘the Paris Syndrome’ (le Bloc-notes Parisien “Ces Parisiens auxquels la Ville Lumiere tourne le dos” Le Figaro March 1 ‘08)
This is the term coined by Japanese soujourners in the ‘City of Light’ when their dream city becomes their worst nightmare. In French the expression ‘avoir du cafard’ means ‘to be depressed’. The state of mind (when it happens to foreigners ) is also referred to as ‘culture shock’. Why should one be depressed when you live in the ‘most beautiful city in the world’?
Hauter mentions the fact that Japanese residents (there are approximately 30,000 living in Paris) are virtually invisible (especially when it comes to elections). He writes:
“They are invisible. Nobody asks them about anything. No one polls them before elections. Parisians act as if they don’t exist. However all these foreigners have chosen to be here out of love.”
It’s when the aggravations of daily life collide with the Paris of their dreams that some visitors get depressed, possibly suicidal, and maybe even require professional help. According to one Japanese resident, one needs to be anarchic to survive in France which is completely contrary to Japanese education.
Hauter states that at least 15 Japanese visitors per year end up at St. Anne’s Hospital. (St. Anne’s is a hospital specializing in psychological cases).
The reason why I mention Hauter’s editorial is quite simply because Hauter suggests Parisians ‘reagir’ i.e do something in response.
He suggests that ‘it’s about time that the inhabitants of Paris leave off their triumphant navel-gazing (the glory days of Paris are over) and force themselves to give a friendly welcome foreigners.
Parislogue’s comment:
First, and foremost, the Paris Syndrome is by no means limited to Japanese visitors. To assume this is discriminatory in itself. Everyone who comes to Paris is bound to have reality either reinforce, shatter or transform their dream image. You, as a foreigner, are not alone in your disillusion. Even Parisians who’ve lived in the city their entire lives are constantly confronting the reality of ‘Paris Today’ compared to how it was ten, twenty or fifty years earlier. In a word, Paris is never perfect. Nor would it want to be.
The day when all the dog doo is permanently scraped away and the pigeons no longer divebomb you on Place du Tertre – you’ll know that Paris is kaput. Meanwhile we learn to do the French shrug of the shoulders and say “C’est comme ca.”
I think it’s admirable of Francois Hauter to remind fellow Parisians that foreign visitors may feel alone and lost in this city, but suggesting to ‘force themselves to offer a warm welcome’ is not necessarily the solution. The only true welcome is one that comes from the heart. Big cities do not lend themselves to warm welcomes – I wouldn’t expect such treatment in Tokyo or New York, so why Paris?
So here is my suggestion if you’re preparing for a trip to Paris – either for a couple of days or a couple of months:

1. Greet the city with a blank page. Let your Paris experience write itself as you go. Leave your dreams and expectations back home.
2. It’s nothing personal. A waiter clicks his pen impatiently. A shopkeeper gives you the cold shoulder. Their loss, not yours. Take your business elsewhere. There are dozens of shops and restaurants in Paris.
3. Feeling alone? There are tons of associations, clubs, and foreign language groups where you can exchange ideas.
4. No courage to go out of your apartment or hotel? Send an e-mail to Parislogue.
Chase away the blues:
FUSAC (a free English flyer lists ads for counseling services for foreigners). You can find this flyer at English-language bookstores and some English-theme cafes i.e Indiana Cafe.
WICE
20 Blvd. Montparnasse, Metro: Duroc
English/French conversation groups.
A jog in the Bois de Boulogne. Join a running association.
A visit to the Buddhist temple. Bois de Vincennes.
More Useful Sites:
Understand France
Japanese News in Paris
Other Parislogue articles:
Culture Shock