The Most Beautiful Christmas Creche in France 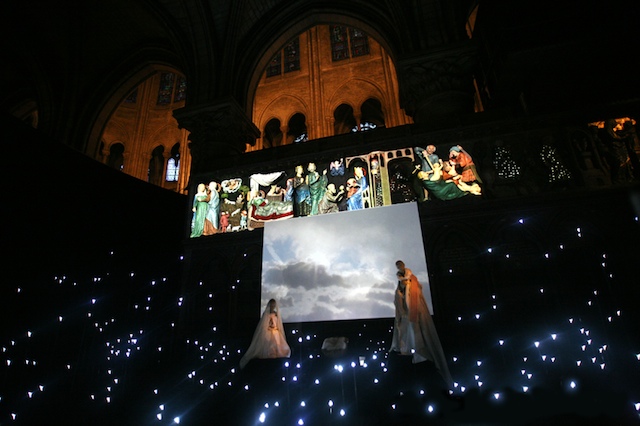 A major part of Christmas tradition is the ‘Christmas creche‘ or Christmas manger. Creche is the French word for cradle, but can also mean a place to shelter infants and toddlers. The meaning even extends to daycare centers.

Notre Dame Cathedral in Paris has pulled out all the stops to create an innovative Christmas manger scene. Perhaps 2 million visitors will view this ‘high-tech’ creche which combines video projections with traditional decor. The theme is meant to integrate the ‘light’ or ‘lumiere’ into the traditional Christmas image of a simple manger scene – where Mary, Joseph and the Infant Jesus are surrounded by farm animals and shepherds.

“Using light as this year’s theme, the Infant Jesus sleeps in a manger, Light of Lights, Light of Nations, Light that gives life, Light that transforms and transfigures all who are touched by His Light.”

“By mixing video projections and traditionnal decor, the goal is to open the perspectives of the manger scene toward contemporary realities – extending beyond the confines of the cathedral, thereby rendering an interactive historic evolution of Christ’s birth while still maintaining the traditional focal points for visitors and pilgrims.” Confused? So was I!

In a nutshell, it’s explained:
“The figures of the Holy Family are virtually suspended in light, that is, millions of stars beneath a sky and floating clouds. The effect is created with the help of 5 videoprojectors for digitized animation, 400 LED spotlights and a 2 X2 meter transparent plexiglass screen allowing the manger to be floating in the sky.

The effect is described in this way:
“The starry sky brings to the manger scene an impression of floating – almost unreal, extending the Christmas decoration toward infinity.” Innovative? Yes. Beautiful? That depends – on your definition. 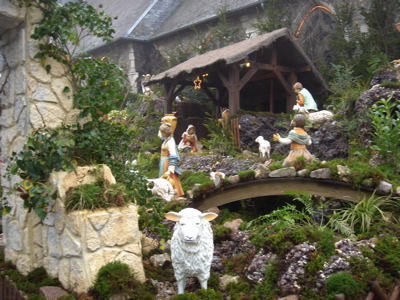 Certainly, 2 million people will not have the chance to see this manger. You need to head to the Departement de l’Eure in Normandy by way of the Autoroute 13 and the National Route (formerly the N13 (now 613) and exit at Thiberville, Eure in Normandy (about 90 miles west of Paris). Thiberville is a town of 1200+ inhabitants and doesn’t have the budget of Paris – but what a delight to see this traditional manger scene – that traverses the centuries -without special effects! 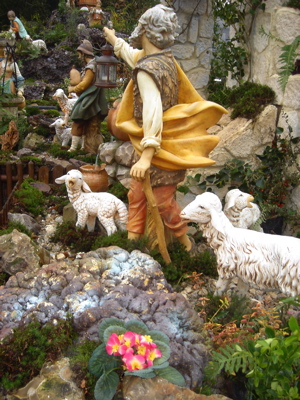 Tradition of the Christmas creche was said to have begun with St. Francis of Assisi in 1226. 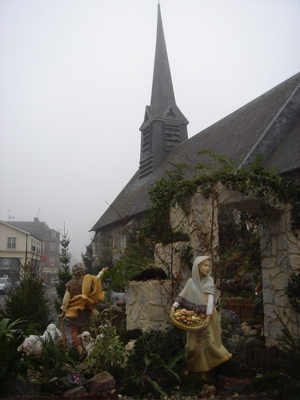 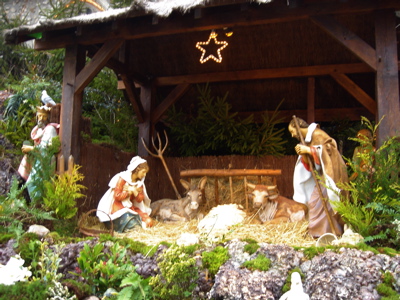