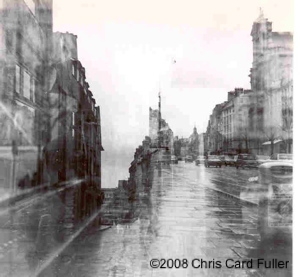 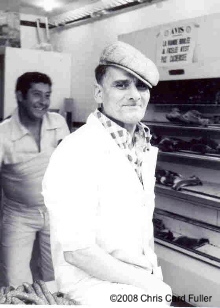 When I want to totally disconnect from time and place, I go to the Marais district. Located on Paris’s Right Bank, it straddles two arrondissements the third and the fourth. You may have heard of the Marais as being Paris’s trendy, gay district. Maybe the reason gay residents chose this neighborhood in the first place was due to its curious blend of crumbling elegance, like a parchment skinned Miss Havisham, abandoned for the broad Haussmanian boulevards.

From its marshy beginnings, a Jewish community developed and flourished by the 12th century doing much the same sort of commerce you’ll find along Rue du Temple nowadays, i.e. wholesale handbag and jewelry shops, haberdasheries and knick-knacks. I learned at the Museum of Jewish History and Culture, located at 71, Rue du Temple that Paris’s Jewish residents had originally settled on Ile de la Cite and eventually migrated to the Right Bank, specifically in the Marais (or marshy area) and around Hotel de Ville/St. Gervais Church.
From the earliest days, this was considered the commercial heart of Paris.

Rue du Temple is a good street to begin a visit to the Marais district. You can catch glimpses of Centre Pompidou looming above narrow medieval alleys in strange juxtapostions.

Historically, the Marais, like its residents has had their ups and downs. When the royal court left the Louvre to follow Henri IV’s lead (which included setting up housing for artisans close by to the royal apartments at Place des Vosges, artistocrats stumbled over one another build ever more sumptuous townhouses or ‘hotels particuliers’ in the district. However when trends changed, and Louis XIV eventually made Versailles France’s new capital, aristocratic homes were neglected. The population once again shifted to an immigrant working class, often Jewish artisans from eastern Europe.

More waves of Eastern European immigrants arrived in the 19th century as well as Chinese immigrants, and as late as the 1970s, some of the Marais’s trendiest streets, such as Rue des Rosiers, looked pretty shabby. Some of us may still prefer the rough edges to the muzaked tidiness, but there’s no doubt that a walk through this neighborhood is still something of an adventure. Innovative galeries and boutiques are plentiful interspersed with a few kosher restaurants and markets (such as the famous Jo Gold’s on Rue des Rosiers), falafel shops, and dozens of the sort of cafe where you are tempted to forget about getting to the museums and just spend the rest of the afternoon sipping a cafe or an apero.

Maybe one of the big changes wrought by the arrival of the Marais’s ‘bobo’ i.e. bourgeois -boheme residents (i.e. yuppies), is the lack of rush. If there’s any neighborhood where time seems to stand still, this is it. And as a result, those of us walking along the winding streets tend to fall under its spell.

For example, when a panhandler came up to me asking for some change, rather than avoiding eye contact as I would do in any other neighborhood, I decided to start a conversation. It turned out that ‘Christophe’ was a poet from Poland. He ended up reciting a poem for me.
“Who do you prefer – the Doors, or the Who?” he asked.
“The Doors.”
“But isn’t it sad that Jim Morrison died at such an early age?”
“But maybe he had a fun life.”
In the Marais, such street conversations can happen. Nothing is predictable here. Buildings meet at strange angles.
Money may change hands, but the collective imagination is constantly striving to transcend. You can sense it – the anticipation of discovery – of euphoria – like the lifting mist from the swamps. 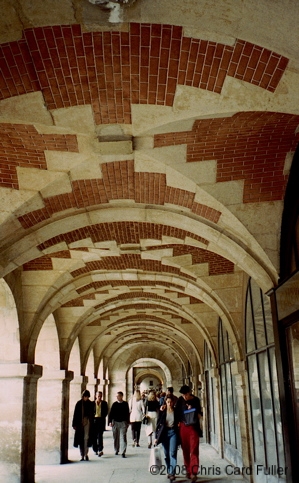 ‘Must See’ Locales
Place des Vosges – formerly the Royal Place. This has to be the loveliest square in Paris with it’s simple fountain adorning a central park surrounded on all sides by arcades.

Getting to the Marais

By Metro, the #1 line, La Defense/Chateau de Vincennes has several stops in the Marais District. Take the St. Paul exit for Rue de Rosiers, or Hotel de Ville for Rue du Temple (Museum of Jewish History). You can also walk from the St. Paul Metro to Place des Vosges (but be sure to bring along your Plan de Paris, or a detailed city map!.

Marais, the Heart of the City of Light
Discovering one of Paris’ most enjoyable neighborhoods
by Melissa Schulz