The Latin Quarter in Paris 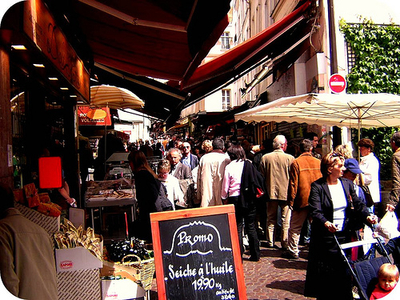 There are certain districts in just about every popular city on earth that you hear mentioned over and over again, especially in certain circles. For students and budget travelers in Paris, one of those districts happens to be the Latin Quarter – but that’s not just a recent phenomenon. In fact, the Latin Quarter has been a haven for budget travelers, international students, and artists for quite a long time.

The Latin Quarter in Paris has been a magnet for students for such a long time, in fact, that’s how it got its name. When the Sorbonne, otherwise known as the University of Paris, was founded in the 12th century in this very neighborhood, Latin was the language of universities everywhere. So it was only natural that the students, as they walked through the streets around the university, would be heard speaking Latin.

Although Latin is no longer the language of choice at the Sorbonne, the venerated university remains at the heart of this Paris neighborhood – and it’s since been joined by a few other educational institutions as well. But of more particular interest to travelers is the lively and social atmosphere which dominates this part of Paris to this day.

Any area which is home to students is going to need to be cheap, and the Latin Quarter has long been one of the more budget-friendly parts of Paris. Mind you, it’s not as cheap as it used to be, because now it’s also quite trendy. But you will still find lots of great and inexpensive places to eat as well as plenty of bars and night clubs for socializing after hours.

The Latin Quarter takes up most of the 5th arrondissement, and part of the 6th as well.

What to Do & See in the Latin Quarter 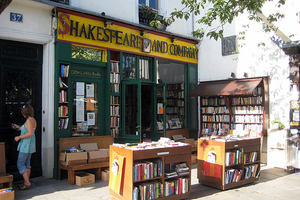 The attractions worth noting in the Latin Quarter include:

Where to Stay in the Latin Quarter

Although the Latin Quarter might not be as full of bargain beds as it used to be, there are still inexpensive places to stay in this part of Paris. In fact, one of the many hostels in Paris is right on the busy and popular Rue Mouffetard – it’s called Young and Happy Hostel, and Parisgirl visited it not long ago to find that it boasts an excellent location and decent prices.

Another hostel which isn’t in the Latin Quarter but is just outside it is Oops Hostel, which Parisgirl also visited and reviewed.

There are also budget hotels in the Latin Quarter, though be prepared for the cheapest rooms to also be the smallest. They’re mostly in historic old buildings, and they didn’t exactly have copious amounts of space to begin with before they started carving out space for en-suite bathrooms, after all. Expect to pay at least €50-75 for hotel rooms in this area, depending on the season and the size of the room.

Where to Eat in the Latin Quarter 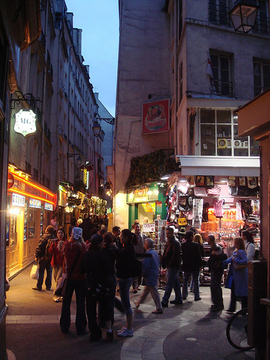 There is a wide variety of restaurants and other eateries in the Latin Quarter, many of which cater to students and budget travelers by not only being inexpensive but also by being quick. As this area has gotten more popular, there are more not-so-good restaurants and even tourist-trap restaurants which have set up shop, so be sure to look around and compare menus and prices before you decide to take a table.

Your long-time Paris guide, Parisgirl, has written a few posts about dining in the Latin Quarter. You’ll find her posts here:

As mentioned above, there are lots of bars, night clubs, and even jazz joints in the Latin Quarter to entertain you on just about any evening in Paris. There are several good spots on both the Rue Mouffetard and Rue Laplace.

How to Get to the Latin Quarter

>> There are some lovely Latin Quarter pictures on this French website, from today and from more than a century ago.

original photos, from top to bottom, by: transte, wallyg, austinevan