The Islands of Paris 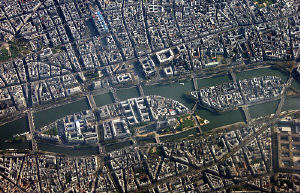 While anyone visiting Paris would notice immediately what an important role the Seine river plays in the city’s geography, it’s actually quite possible to wander through the historic section of Paris and not realize that some of the sights you’re enjoying are actually on islands. I know the first time I visited Paris it wasn’t until much later that I realized the amazing Notre Dame cathedral was on an island – somehow the fact that I’d walked across a bridge to reach it didn’t occur to me. Yes, I’m a bit dense – but I know I’m not alone.

There are two natural islands on the Seine river right in the center of Paris, and they’re right next to each other. They’re not only great places to visit, they’re also key to understanding the city’s history.

Île de la Cité
This island is the larger of the two and is where the first settlements which later became the city of Paris were built. There have been people living on the island for more than 2,000 years, and it’s still considered the center of the modern-day city. The primary tourist attractions on the Île de la Cité include the magnificent Notre Dame de Paris, Saint-Chapelle, and the excavated Gallo-Roman ruins underneath the square in front of Notre Dame.

Île Saint-Louis
This is the much smaller island of the pair; they are close enough to be connected by a handy bridge. There are far fewer “attractions” on the Île Saint-Louis, but it’s a lovely place to wander (partly because it tends to be ignored by tourists) – and home of the best ice cream in Paris at Berthillon.

Getting There
Island or not, there are both Paris Metro & RER stations on the Île de la Cité, and the bigger island is also served by several bus routes. The smaller Île Saint-Louis is only served by a few bus routes – or by your own two feet; it really is a very short walk from the Île de la Cité.

Staying There
Both islands are heavily residential, and while there are hotels on both they tend to be much more high-end – the city’s islands are not the places to look for hostels in Paris, let’s put it that way! Still, if you’re in the market to spend a bit more for the pleasure of staying at the epicenter of Parisian history, there are luxury hotels on both islands.