The Illusion of Safe Neighborhoods 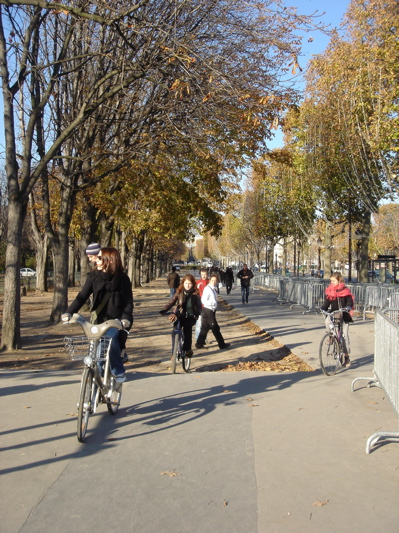 How safe is Paris? Compared to many world capitals, Paris is generally a very safe city. However, looks can sometimes be deceiving, especially when it comes to Paris’s most famous avenue, the Champs Elysees.

Tuileries garden – while walking around the Tuileries on a quiet afternoon, I was immediately approached by a girl of about 12 years old, holding up a a card asking for money. She also spoke fluent English. You’ll find ‘romanie’, ‘les gens de voyages’ or ‘gitanes’ (no longer politically correct) gypsies at train stations (particularly during the summer months). The main thing is to keep alert, and never be distracted in conversation with friends or family when you are ‘in transit’ i.e walking through Paris’s train stations or Metro corridors.

If you maintain an alert attitude at all times, you are less likely to have any hassles.
Pickpockets can work best when you are occupied either with friends, or purchasing food at quick food stands in train stations.

Certain Metro lines and Metro stops tend to be more ‘at risk’ than others, particularly on the more tourist jammed lines such as the #1 line which runs from the Champs Elysees stop to the Louvre and the Marais.

Chatelet with its long corridors between connecting trains also has a reputation for attracting pickpockets. If you are staying at a reasonably safe hotel, you might consider leaving certain travel documents, either in a room safe, or locked in your suitcase.

Over recent years, the ‘Champs’ has gone through changes, some good and not so good. Once marred with bumper to bumper parking, the sidewalks were expanded during the nineties and new rows of trees were added. Plenty of underground parking has made the avenue much more pleasant for walking.

On the negative side, much of the ‘cache’ of past years has been substituted with the type of ‘glam’ which doesn’t really represent Paris at its best – when it comes to designer boutiques (these, you’re more likely to find on the adjacent avenues such as Avenue Montaigne.

But even more disturbing is the increase in crime. Designer purse snatching has been around for a long time, but a new addition are the ‘ladies of the night’ who have moved their operation from the outskirts of the ‘Champs’ right onto the Avenue.
So, if you happen to encounter extremely attractive women eager to ‘show you around’ beware! You may leave Paris with a much lighter wallet.

Needless to say, exercise the same kind of caution regarding handbags, wallets, etc. that you would use in more dicey neighborhoods. Don’t let the tree-lined, tranquil avenue fool you.

Women alone: The French police have been doing a pretty good job apparently. A ‘Montparnasse’ area rapist who had attacked at least five women in the Montparnasse area has been picked up with the help of women’s reports and also with video surveillance. Keep in mind that many of the Metro trains have operators – if you have a problem while using the Metro, stay close to the front car which will be closer to the operator. Do not linger on Metro platforms after they’ve emptied out – and take compartments that are populated.

Of course, most of this is common sense that you use instinctively in any major city. Generally speaking women should feel comfortable about walking around on their own in the evening, keeping in mind that you still should stick to streets that have foot traffic.
Latin Quarter, Montparnasse, Bastille are all busy nightspots. Save your walks to less populated areas for the daytime.