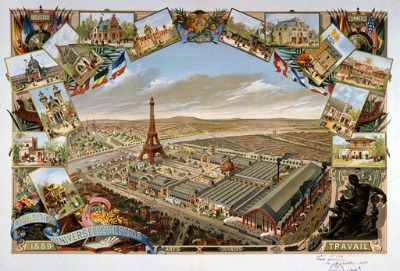 Naming Paris’ most famous monument requires almost no thought, even by people who have never visited France. The Eiffel Tower is one of the most famous monuments on earth, let alone an iconic image for the French capital. Planning a visit to the top of the Eiffel Tower during a Paris trip isn’t unique, but to go to Paris without surveying the city from the top of the tower is to miss out on one of the best views in the city.
The Eiffel Tower is so much a part of the Parisian skyline today that it’s hard to imagine Paris without it. The tower was built in 1889 for that year’s World’s Fair, set in Paris – the tower served as the fair’s focal point, and the arches at its feet were the entrances to the fair itself. Spread out in front of the Eiffel Tower was the fairgrounds, complete with pavilions representing countries all over the world. It was, as all World’s Fairs were, a chance for people to gather in one place and see what the rest of the world had been up to.
Today, of course, we have the internet to tell us what’s going on around the world in the flicker of an eye – the idea of having to wait for the next World’s Fair several years away to see innovations from the other side of the planet is inconceivable. Luckily for those of us with a bit of an old-fashioned romantic streak, however, we can try to imagine what that might have been like by visiting World’s Fairs locations of years gone by.
Few people will be booking tickets to Paris with the 1889 World’s Fair in mind, but a visit to the Eiffel Tower can potentially be made a bit more interesting if you try to picture what it was like in 1889 during the big expo.
Stand atop the Eiffel Tower today and imagine the fair’s attractions and pavilions spreading out over the grassy Champ de Mars. This is, of course, a vantage point attendees at the 1889 World’s Fair didn’t even have – the tower itself wasn’t finished when the fair opened, so visitors were only allowed as far up as the second level platform (and they had to walk up the stairs). Picture the specially-built rail line that ferried people around the fairgrounds, stretching nearly two miles through the pavilions. Your transportation options in France are certainly more comfortable today, but who could deny the appeal of a fair-specific railway in 1889?
You have likely read that when it was first complete, the Eiffel Tower was considered a stain on the Parisian landscape. The French thought it was incredibly ugly, and were no doubt counting the days until it would be torn down. The original plan was for the tower to be taken down 20 years after the World’s Fair – but when it turned out that the tower served a utilitarian purpose as a radio tower, it was decided that it would be made permanent.
Over time, Parisians seem to have gotten used to it – no doubt partly because of how beloved the tower is to all the foreign visitors who flood the city each year.