The Bohemian Life in Paris: When Opera reflects reality 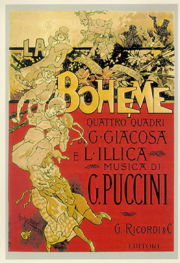 Long before reality TV, there was opera, that is, there was La Bohème. Shown for the first time in Turin, Italy in 1896, Puccini’s successful opera’s plot (or libretto) was based on Henri Murger’s semi-autobiographical account of living as a down-and-out in Paris’s Latin Quarter (the opera is supposed to start on Christmas Eve of 1830 when Murger would have only been 8 years old!).
His collection of stories, “Scenes from the Life of a Bohemian” was published in the 1840s, about the same time that he was living on coffee and water. In those days, his band of friends didn’t drink much but coffee and water – much to the dismay of the Parisian waiters who had to serve them in their Latin quarter cafe.
According to Wikipedia, the term ‘bohemianism’ “was first used in the 19th century to describe untraditional lifestyles of marginalized artists, writers, musicians and actors in major European cities.” Bohemia was considered to be the origin of European gypsies but ‘Bohemians’ only resembled gypsies in their choice to live outside of society’s norms. Poverty wasn’t always unavoidable, but a chosen way of life.
So, why is it that well-to-do people spend outrageous amounts of money on tickets, get dressed up so they can warm velvet seats while listening to songs about a bunch of poor artists hanging out with their prostitute girlfriends in a Paris slum? What could possibly be so glamorous about poverty?
It’s a mystery, that is, unless you’ve heard Pavarotti sing La Bohème (as he did in the 1977 recording at the Met which you may have heard yesterday, Jan 19’08 over Public radio).
And, of course, there is a love story. Mimi, the heroine, dies of consumption. Maybe the reason that this opera continues to draw in opera converts is its affirmation that stories of the heart and affection override all barriers. In fact, love seems to flourish as poverty increases.
So, here is my wish for you. I hope you have the opportunity to be poor in Paris – for a while – not forever.
Given the current exchange rate – between the dollar and Euros, that should be easily achieved, but I really believe that experiencing Paris on a tight budget or next to zero budget will promise to create your most memorable and love-filled days (and nights) in the City of Light. To help you along the way, be sure to check on Free Paris.
Although, La Boheme will not be performed this season (2008) in Paris, you can find La Boheme at La Scala in Italy or at the Met in New York.
Paris National Opera Schedule for 2008