That Quirky 2CV: The Little Engine that Could!

At first glance, the 2CV may look flimsy, or downright weird, but far from it. These cars were designed exactly sixty years ago to be practical. Originally, the goal was to be able to carry a dozen eggs over bumpy fields without breaking a single egg.

When 2CV drivers crossed the first few fields – they just kept on going, over mountains, across deserts. In 1958, two French students Jean-Claude Baudot and Jacques Seguiela did an around-the-world trip in their 2CV. They covered more than 100,000 kilometers. Rare film footage captures images of the 2CV in Vietnam and a 2CV reached Tibet about the same time that the Dalai Lama was leaving Tibet for India. 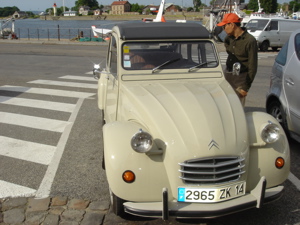 Other 2CV adventure voyagers were Jacques Cornet and Henri Lochon who racked up over 52,000 km while crossing North and South America, Africa, Spain and France between 1953 and 1954.

Then in 1970, Citroen decided to sponsor a Paris-Kaboul (Afghanistan) rally. They wanted to appeal to students throughout France. and the response was enormous. Remember that Paris had just barely recovered from the 1968 student demonstrations. Hippies and flower power were in full bloom. Everywhere – youth were on the move – heading east from Europe to India and North Africa. Hundreds of 2CV drivers registered for the trip. Those that were selected (494 cars in total) were asked to take photos along the route.

The rally was such a success that a subsequent African rally (Paris/Persepolis) was organized the following year. It included crossing the Sahara desert.

Like the VW beetle, the 2CV was also a political statement – whimsical and counter to the status quo. Although 2CVs are much more rarely seen on the streets of Paris, small cars are still cherished by Parisians who know that a small car handles the city streets – and rare parking spots much more easily than larger luxury vehicles.

To celebrate the 60 year anniversary of its creation, the Cite des Sciences 2CV exhibit will run until November 30, 2008. 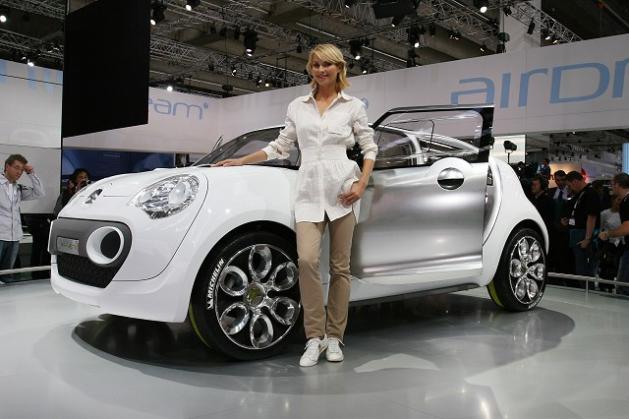 Citroen’s latest hybrid concept car – the C Cactus appeared last year at the Frankfort Car show. The C-Cactus differs from other hybrids in that it runs on diesel power and electric. It is also a simplified car with only 200 parts. That’s about half as many parts as the typical mid-range car.

I’m not sure if the C-Cactus would be the car I’d choose to cross the Sahara, but at the very least, it’s a step in the right direction. Can we really look to European car manufacturers to introduce the all-terrain electric car that will truly abolish the need for gasoline or diesel? Who will be the courageous innovator to liberate us from our dependency on oil? Maybe this October’s 2008 Paris Car Show will uncover some of the industry’s answers to high fuel prices.

In the meantime, enjoy the nostalgia of yesteryear and check out the 2CV FREE POSTCARD you can send to your friends (even if you’re not in Paris!).