Ten Good Reasons to Visit Paris in the Fall 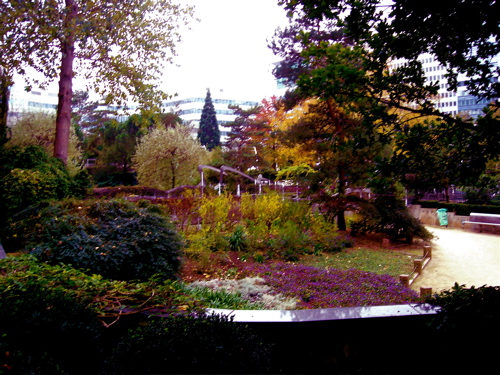 1. Cheaper air faires.
2. Theaters and opera season begins
3. That rare species the ‘Parisian’ can be seen in the outdoor markets.
4. Fall flowers in the parks.
5. Less pollution.
6. Fall fashion.
8. Le jour de patrimoine. One day when all the museums are free to the public.
9. Autumn light for taking great photographs.
10. Roasted chesnuts sold on the street corner. 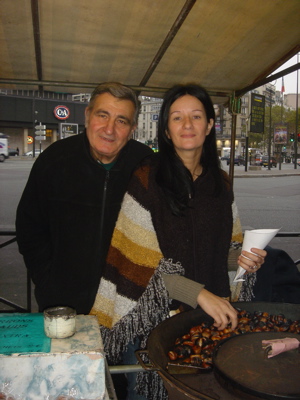 We are the ‘marronniers’ i.e. chestnut roasters, says Dad of the father and daughter team selling roasted chestnuts at Montparnasse.

You know it’s autumn in Paris when the chestnut vendors are out on the street corner.

You can buy a small package of roasted chestnuts for 2 Euros.

Chestnuts have traditionally been a rich nutrient to fortify you during the cold weather.

Even though the weather can turn downright miserable toward the end of October, I would still recommend Fall as the season to visit France. The parks take on a vibrancy, an intensity that makes summertime frivolity pale by comparison.

You can really savor France’s comfort foods in the fall season such as hot onion soups or a cup of hot wine (for which you’ll want to add the packet of sugar which accompanies it.) Take advantagage of the fresh wild mushrooms you’re bound to find on some menus, and try rabbit or venison (gibier) for a different flavor.