Taking the Chunnel between London and Paris 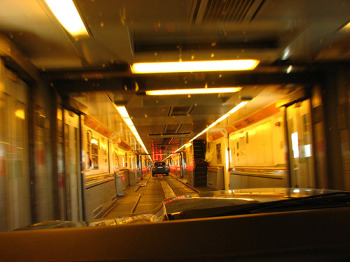 You probably know that there are several ways to get from England to France – and specifically to get from London to Paris (or vice versa). But there’s no getting around the novelty factor of taking the Channel Tunnel, affectionately known to many as the “Chunnel,” to make the trip. Why take a boring old hydrofoil or airplane when you can zip through a tunnel running underneath a massive body of water instead?
If taking the Chunnel from London to Paris seems like your kind of thing, then here are the various transportation methods that use the Channel Tunnel.

Taking the Eurostar Through the Chunnel 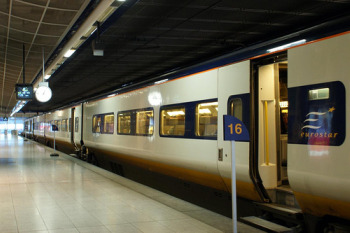 When it comes to speed and convenience, you can’t do much better to get from London to Paris than to take the Eurostar train. The Eurostar zips through the English and French countryside on either end of the Channel Tunnel at a whopping 300 kph (186 mph), although when it’s going through the tunnel itself the train is restricted to 160 kph (100 mph). Still, nothing to sneeze at. The Eurostar will have you from London’s St. Pancras station to Paris’ Gare du Nord in a blistering 2.5 hours.
Of course, this speed and convenience comes at a price. A round-trip ticket can cost as much as £160 (€180+) if you’re trying to book at the last minute. Booking in advance will save you a bundle, as there are usually specials running for round-trip tickets (otherwise known as “return tickets”) in the £45-60 range (€50-70). One-way tickets are often significantly more expensive than you’d think they would be for a train trip – but the Eurostar treats one-way trips the same way airlines do, and prices them accordingly. They are offering more one-way ticket specials these days (sometimes as low as £50/€60), most often for people who book well in advance, so it’s worth checking.
>> More information about taking the Eurostar from London to Paris (or vice versa), and a link to buy Eurostar tickets online

Taking the Bus Through the Chunnel 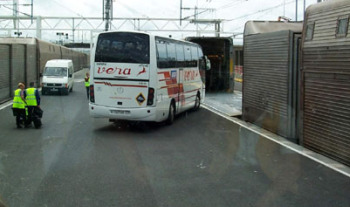 For some budget travelers, the Eurostar train fares are a little high – especially if you’re traveling without a set schedule and can’t plan far enough in advance to take advantage of cheap Eurostar specials. Among the cheaper alternatives to the Eurostar that still include a trip throug the Channel Tunnel, taking the bus is the most budget-friendly option. What you gain in savings by taking the bus, however, you lose in speed.
There is one option for a bus you can take through the Chunnel to get from London to Paris (or vice versa), and it’s a big coach company with a network of lines criss-crossing pretty much all of Europe – Eurolines. The trip will take roughly 9-10 hours one way, so it’s definitely a time investment that’s only going to be appealing if your finances are more limited than your schedule.
Eurolines operates seven coaches every single day from London to Paris, leaving London’s Victoria Coach Station and ending up at the Eurolines station in Paris near the Gallieni Metro stop. But only four of the departures from London travel to Paris via the Channel Tunnel – the rest load buses onto ferries and travel on top of the water. To go by Chunnel, you’ve got to leave London at either 08:00, 10:00, 14:00, or 22:30 (and this can change, so be sure to check which trips go through the Channel Tunnel before you book). One-way Eurolines fares generally range from £14-25 (€16-30) in the “Funfare” category (the cheapest tickets), and round-trip tickets are just two one-way purchases (so no discounts on a return trip).
>> Learn more and book your Eurolines tickets in advance

Driving Through the Chunnel 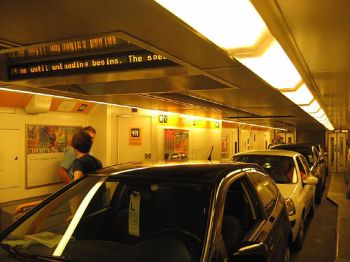 If your trip includes lots of off-beat destinations and back roads in both England and France, that probably means you’ve picked up a rental car somewhere along the way. Generally speaking, driving a car into Paris is best avoided if you can, but an itinerary that’s heavy on rural France and not so much on cities makes a car a good option. And you can take your car from one country to the other via the Channel Tunnel.
When I picture driving through a tunnel, I picture powering my own vehicle down a long stretch of paved road through a dark tunnel, always watching for that pinprick of light signalling the exit on the other end. That’s not what happens when you drive through the Channel Tunnel. Instead, you drive your car into what’s called the “Eurotunnel Shuttle” – which is a train. Cars take up about half the train, parked end to end, and you can choose to either stay in your car during the trip or get out and walk through the train. But don’t stray far – the trip only lasts 35 minutes.
There are 10 Eurotunnel Shuttles per day to get your car from one side of the Chunnel to the other – they run every two hours starting at 06:00 (there’s a break from the midnight train until the next 06:00 train). The cost of taking your car through the Channel Tunnel can be as low as £53 (€62) for a one-way trip, and there are often special discounts on short trips (round-trip tickets when you return 2-5 days later, for instance). 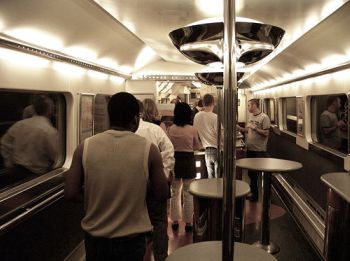 As mentioned above, you can’t drive your car through the Channel Tunnel as if it were any other long tunnel, so you might be wondering what the experience of riding the Eurotunnel Shuttle or the Eurostar train through the Chunnel is like. If you’re dreaming of train cars with big windows that let you look out on water surrounding you on all sides, you’re going to be seriously disappointed.
The trains that speed through the Chunnel are well-lit inside, but you won’t see anything but blackness outside until you’ve come out from under the water. Of course, since the trip itself is only about a half-hour, it’s not like you’d have the time to really settle in and watch fish overhead or anything.
photos, top to bottom, by: jespahjoy, uitdragerij, Bitman, bram_souffreau, salimfadhley