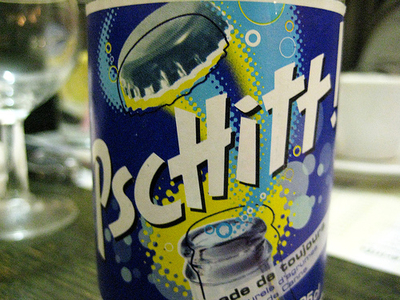 You know how sometimes there’s just no stifling a laugh, even when you know you’re the only one who thinks something’s funny? To any student of the French language who’s discovered one of the oldest soft drinks in France, this is an unavoidable moment – when you realize that the “p” in the word “Pschitt” is, in fact, silent.
That’s right, folks, that bottle of lemony-sweet soda pop is screaming what sounds like “shit!” at you. And it really is screaming – there’s even an exclamation point on the end.
Pschitt drinks (I’m giggling even as I write that) date back to the mid-1950s. They were introduced by Perrier, and the name is supposed to be the rough equivalent of the sound a bottle of a fizzy drink makes when you open it. In English, we might write that sound as something more like, “pfffft,” but that’s probably because if we wrote or said “pschitt” we’d be at risk for getting our mouths washed out with soap.
The worst that drinking from a bottle that’s labeled “Pschitt” is going to do is make young travelers laugh (and, if we’re honest, even not-so-young travelers), which isn’t too bad. In fact, the name has probably resulted in higher sales among English-speaking tourists. (If you had the choice between two fizzy beverages and one of them basically gave you permission to utter a bad word in ordering it, wouldn’t you choose the naughty word?) This is in direct contrast to the language mishap that was the Chevy Nova – the car maker wondered why it didn’t sell at all in Spanish-speaking countries, until someone pointed out that “no va” means “doesn’t go” in Spanish. Oops.
So if you’re trying to get your kids excited about a trip to Paris, one sure-fire way to do it is to let them order Pschitt every chance they get. Oh, and if you can find a reason for them to say “seal” in French, even better.
>> Want to know what “seal” is in French? For that, you’ll have to read more about some of our favorite French swear words.
photo at the top by svanes