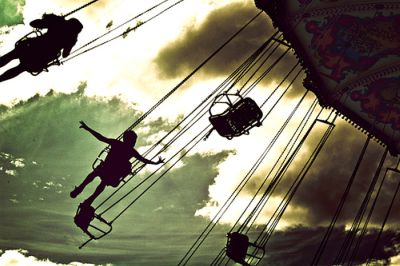 No matter how many times travel experts tell people to try to avoid visiting popular cities like Paris during the high summer travel season, there will still be gazillions of people for whom there really isn’t another viable option for their vacation. And if you find a travel expert who tells you to skip a trip altogether rather than go in the summer, let me know so I can slap them.
In other words, even though visiting Paris in the summer isn’t necessarily what I’d recommend, a summertime trip to Paris is still going to be glorious and – this goes without saying – better than no trip to Paris at all. What’s more, you can minimize some of the discomfort associated with a peak season trip to Paris, too. We’ll go over some ways to do that in this article.

Getting to Paris in the Summer 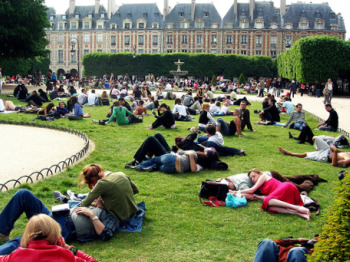 Although you’ll find flights to Paris throughout the year, unlike some destinations that have almost entirely seasonal traffic, you will still find more frequent flights to Paris in the summer months to meet the higher travel demand. Unfortunately, more flights doesn’t mean cheaper prices in this case – airlines know that this is the most popular season, so the fares are raised accordingly.
If summer is the only time you can book your trip, be prepared to pay more for airfare to Paris than you would if you were traveling in any other season. Summer visitors on a budget have to be even smarter about doing their research before booking a flight, and that usually means starting to look at airfare prices sooner than for trips at other times of the year.
I’d suggest setting email fare alerts with your airfare booking engine of choice as early as February or March – there are often springtime sales that extend into the early summer months, but if you start looking in May they’ll most likely be gone.
The other option for saving on an airline ticket to Paris in the summer is to look at visiting in August as opposed to June or July. It’s typically the hottest month of the year, and the one when more things may be closed because it’s the national holiday month in France when locals head out of the cities and hit the beaches – but of the summer months it tends to be the cheapest. 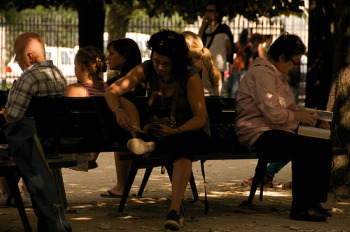 Summer in Paris can be downright sticky-hot. August, as mentioned, is generally the hottest month of the year, but July can be steamy, too. If you’re looking at averages for Paris weather, you may think it’s not going to be that bad – and it may not be the year that you’re traveling. But in recent years Paris (along with much of the rest of Europe) has experienced serious heat waves in the summers with temperatures and humidity levels soaring. So when you’re trying to figure out what to pack for your Paris trip, be sure to check the actual weather forecasts and not just the averages in your guidebook.
It’s always a good idea to follow the lead of the locals when it comes to things like attire and daily habits, since they know what’s best in their city, but I think it’s even more important in a Parisian summer. The locals aren’t rushing around in the heat of the mid-day, and neither should you. Be ready to slow down in the summer, and don’t forget to drink plenty of water.
>> Read more about weather in Paris

Things to Do in Paris in Summer

French Open
You don’t have to be a huge sports fan to know about the French Open, one of the bigger tennis tournaments of the year. It usually begins in May, but if you’re visiting Paris at the beginning of June it might still be going on by the time you get there. Getting tickets can be a costly affair (especially last minute), and it may cause hotel prices to go up for hotels close to the tournament, so keep that in mind for your own trip.
Paris Plage 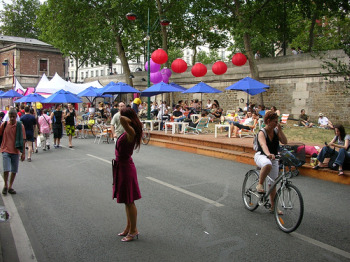 If Paris can’t go the beach in the summer, let the beach come to Paris – that’s the idea behind Paris Plage. Originally intended to give Parisians who couldn’t afford to go to France’s beaches in the summer, it’s become a fun and popular escape for locals and visitors alike. (Don’t be fooled into thinking this is the kind of beach where snorkeling gear and a waterproof digital camera are going to come in handy, but it’s kind of fun if you’re in Paris in August.)
Summer Sales in Paris
Shopping in Paris is a great pastime no matter what month it is, but the official sale periods in France are strictly governed – so there are only two times of year when shops put on sales. If you’re lucky enough to visit during the summer sale, you might want to bring an empty suitcase with you.
Bastille Day
France’s biggest national holiday is Bastille Day, and being in Paris on July 14th is great fun even if you’re not French. It’s one of the few days when the Champs-Elysees is closed (for the big military parade), and there are fireworks at the Eiffel Tower that night. Many things around Paris will be closed on the 14th, including banks and most attractions, but there are enough holiday events taking place that you should be well entertained.
Tour de France
Although bike racing isn’t as big a sport in the United States as it is elsewhere in the world, American cyclists like Lance Armstrong and Greg LeMond have made it so most Americans at least have heard of the Tour de France. This annual 3-week race through France happens every July, and although it’s only the final day that’s in Paris (again shutting down the Champs-Elysees) you’ll no doubt find bars and cafes with TVs tuned to the coverage every day.
Foire Saint Germain
Paris has several spring and summer fairs that are typically meant for locals but are fun for visitors, too – the Foire Saint Germain in the lovely Saint Germain des Pres neighborhood generally starts in May and goes through July. It’s a street fair with music, antique sellers, and (of course) food.
Paris Cinema Film Festival
The Paris Cinema Film Festival doesn’t have the history of some other festivals around the world, but it’s already fairly popular and can be a fun opportunity mingle with locals and see some movies you can bet won’t come through the multiplex in your hometown.
Outdoor Movies at Parc de la Villette 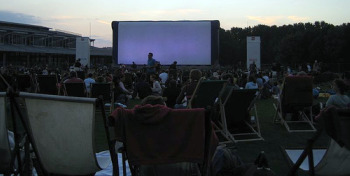 Another summer event movie lovers might be interested in is the series of movies shown at Parc de la Villette outdoors. Tickets are cheaper than the film festival, and the outdoor movies let you soak up the summer weather as well as allow for picnic refreshments.
Fete de la Musique
Paris isn’t cheap, so free activities are always welcome. This annual music festival is held on the longest day of the year – the summer solstice – and you’ll find music performances in cafes and even outdoors throughout the city, all of which are free.
Gay Pride Parade
You absolutely don’t have to be gay to enjoy the spectacle of Paris’ Gay Pride Parade – and if you’d rather avoid the whole thing, be sure to find out what day it’s happening and what the route is. Crowds are usually plentiful.

Other Useful Information about Traveling to Paris in the Summer