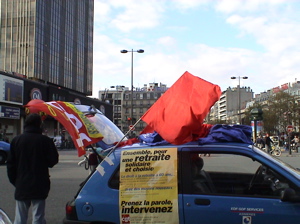 Monday morning 7 am, November 19th, the strike continues until an accord can be met between labor unions and the French government.

First, I have to apologize for some major MISINFORMATION.

During the strike, transport on the RATP Metro service is NOT FREE. So I have been informed by Eric who mentioned that the ‘controlleurs’ or ticket checkers actually had the nerve to ask people to show their used Metro tickets.
This was on one of the lines (unlike Line #13) that had been transformed into a sardine factory.

According to Eric who takes the Metro from Boulogne to work on Paris’s Right Bank, the ticket controller asked for a few tickets and finally he gave up when Metro riders responded in fury. Needless to say, people were slightly irate.

So here’s the story, theoretically even though all the gates are open and few very people are manning the ticket sales booths, you are expected to put your ticket through the turnstyle machines. Not surprisingly, not too many people have been doing this – which is why I ‘assumed’ that the Metro was ‘free’ during the strike.

There are fines for not having a ticket when a ‘controlleur’ asks to see your ticket. Be forewarned.

If you are wondering about getting to and from CDG, all I can advise is to leave EARLY for the airport. We left this morning at 7 am for a 12 noon flight. It took us 2 1/2 hours for a trip that normally takes 45 minutes to an hour. If you are going from CDG into Paris, there are major traffic jams today. Air France shuttle buses are an option for transport. We saw Air France shuttle (CDG to Orly) in the traffic jam.