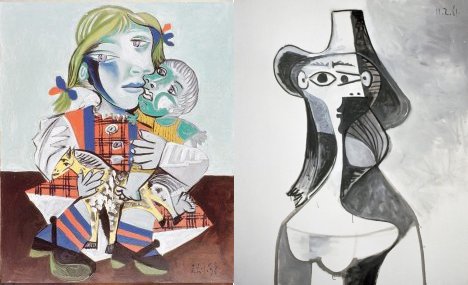 You’ve got to love the French police when it comes to tracking down art thieves. It could have been a scene form a Pink Panther movie with all the elements of a thrilling caper. You’ll remember that back in February I posted regarding the theft of two Picasso paintings from the Paris apartment of Picasso’s granddaughter who lives on Rue Grenelle. The two paintings, Maya a la Poupee, 1938 and Portrait of Jacqueiine 1961 could have brought in 50 Million Euros at a Sotheby’s auction, but for these two thieves the paintings were worth zip.
Major art dealers had already been alerted, so finding a buyer for these hot items would have been tough.

The real heros in this story are the BRB or the Brigade against Banditry who worked in cooperation with the OCBC or the cultural theft agency. They have to get some award for tenaciousness – having cracked this case in less then seven months.

How ironic that the paintings should end up sitting pretty in the back seat of a car in the Champs Elysees neighborhood. You know I’ve mentioned any number of times not to leave things in the back seat of your rental car – but especially Picassos. Then again, why bother stealing something you can’t sell, that is, unless you happen to be one heck of a copyist!

Three cheers for the BRB for bringing back the paintings to their rightful owners. The paintings were returned unscathed.