Stay on Your Toes: 3 Paris Scams to Be Aware Of 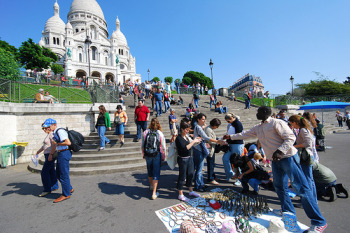 One of the questions I get asked often by people who haven’t traveled much (or at all) and are planning their first overseas trip is, “Is it safe?” I’m never sure whether they’re asking because they think a big city in another country is going to be inherently more unsafe than a big city in their home country, or whether they’ve just heard some kind of horror story from other travelers.

I do understand, however, being nervous about confronting even the smallest snafu in a language that’s not your own. And I know that there are some pretty creative crooks out there coming up with new and interesting scams everyday. Which is why I wanted to bring a post I found about scams in Paris to your attention.

Now, by presenting this information, I don’t want to give you the impression that Paris is an unsafe city. Sure, there are things to be wary of in Paris – like there are in big cities all over the world – but that doesn’t mean you need to be walking around the city feeling paranoid or, worse yet, not go at all. The most important part of staying safe when you travel is being aware and informed, and learning about these common scams in Paris is one step in the right direction.

This article comes from the helpful folks at EuroCheapo, and it outlines three ways people will try to help you part ways with your hard-earned travel money. One of them is really common, one of them seems so weird that it could never work (but it clearly does or they wouldn’t keep trying it), and one of them is so blunt you almost want to give them credit for being up front with you.

The guys who try to tie bracelets on your arm as you’re walking around at Sacre Coeur and then won’t leave you alone until you pay for it are bold, and if you want to enjoy the view from the famous church’s front steps it can be tough to avoid them. But you don’t need to walk around with your hands shoved in your pockets. As EuroCheapo advises, usually all it takes is a simple, “No, merci” as you keep walking to make them try to find another victim.

I’m with EuroCheapo, as I can’t fathom why the “lost ring” scam works at all, but obviously enough people fall for the ruse that thieves continue to employ it. This one, luckily, is easy to avoid. If someone marches up to you and asks if you lost a ring, unless you actually have lost a ring, say no firmly and clearly and keep walking. Don’t stop when they keep talking to you.

It’s the last scam listed in the EuroCheapo article that makes me think, “Wow, you get points for being forthright, at least.” Evidently some scammers will walk up to you and ask if you speak English, to which you say yes, and they then present you with a sign – written in English, so very handy since you can read it – asking for money. Obviously, you can say no and walk away, or you can give them a few coins if you wish.

It’s worth it to read through the EuroCheapo article to learn more about these three scams (and also where in the city each of them tends to be most common), but it’s also just good general advice to keep your eyes open and stay aware of your surroundings whenever you travel – and wherever you go.