St. Patrick's Day in Paris: The Morning After 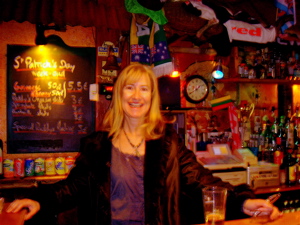 If there’s one holiday that makes me a little homesick while in Paris it’s St. Patrick’s Day. That’s probably why this is the night that expats jam the bars and pubs that feature Irish beers and Celtic music (and it was definitely the case last night according to our host at the WOS bar (formerly the Aussi bar). Unfortunately, my husband (who’s mother was English) doesn’t share my sudden urge to find the closest pub serving up Guinness beer on a crisp March night in Paris. So, we weren’t there last night for the merrymaking. This year, because St. Patrick’s Day fell on Monday which is normally the quietest day for bars in Paris, the celebrations began early, starting on Friday night of the past weekend.
The Aussi bar at 184 Rue St. Jacques has transformed into the WOS bar i.e. wide Open Spaces Bar. It still retains its pub atmosphere and you can chat in English with the bartender until the cows come home (on a quiet morning-after) as we did today. During the lunch hours, we were two of the six patrons. Two others were taking advantage of the free Wifi service.
Although the WOS bar doesn’t serve up pub food at the moment, that may change. For now, you can have a grilled ham and cheese sandwich with your beer as well as salad and tomatoes. The WOS bar isn’t by any means just a way station for homesick expats. Plenty of students from the nearby Paris university stop in for a beer, and take advantage of the student happy hour which begins at 12 Noon! That’s a generous time frame. For those of us that are no longer students (and theoretically working) happy hour doesn’t begin until 4 pm.
Prices here are reasonable. We had a beer, a hot chocolate, three grilled cheese sandwiches and a green salad for 11 Euros.
Quite honestly, this has to be the best deal in town. This is the place to come if you are a student.
I think the bartender must have sensed that I was disappointed to have missed the St. Patrick’s Day Party this year. “You can come next year!” she reminded me, and then invited me to stand behind the bar for a photo next to the St. Paddy’s Day sign. You notice the beer is not Guinness on the bar. That’s Chris’s Bass ale. What else?
Technically speaking, Wide Open Spaces bar is not an Australian, English or Irish bar It’s a world bar. Our host hailed from South Africa. She said, “We had a lot of Irish here during the Rugby world cup.” There’s a fairly large flat screen TV toward the back of the bar.
We talked about getting a business up and running in Paris. The conversation reflects much what I’ve heard from other young people who are trying to start small businesses in France. There’s so much red tape, and even what should be simple things, like getting menus made up takes a long time. These were some of the issues that were supposed to be addressed by Nicolas Sarkozy’s team.
Small businesses are the heart and soul of France. These are the kind of places where both foreigners and residents can find a place to feel at home and chase away the blues on a cold winter’s day.
If you’re planning on being in Paris for St. Patrick’s Day 2009, or you’re just looking for a place to quaff a Guiness beer, (or Bass), watch some rugby and converse in English in a pub atmosphere, Paris has plenty of pubs from which to choose. Here’s a short list of pubs that celebrate St. Paddy’s Day. If you missed St. Patrick’s Day (like I did), you can still make up for it by getting in touch with the folks at Funky Maps for their next ‘Pub Crawl’.
Funky Night Pub Crawls happen every Saturday night. For more information, e-mail: funkymaps@gmail.com or call for info
Tel. 06 98 02 00 23.
You may even end up featured as teh ‘funky picture of the month’. This pub crawl looks so enticing that I may sign up even if St. Patrick’s Day is over!
The Wos Bar “Your Home from Home”
184 Rue St. Jacques
Metro: RER Luxembourg
O’Sullivans Irish Pubs Paris
Guiness Tavern Live Rock Pub
Corcorans Traditional Irish Pub
28 Rue St. Andre des Arts
Metro: St. Michel
McBrides Irish Pub
54 Rue St. Denis
Tel. 01 40 26 46 70
The Galway
Quai des Grands Augustins
Tel 0143 29 64 50
O’Neil
20 Rue des Canettes
Metro: St. Germain des Pres
Cafe Oz The Australian Bars
6-8 Blvd. Montmartre
M. Grands Boulevards
The Beaver Canadian Bar & Grill
19 rue des Deux Ponts 4eme
Metro: Pont Marie, St. Paul
The Auld Alliance Pub – The Original Scottish Pub in Paris
80 rue Francois Miron
Metro: St. Paul