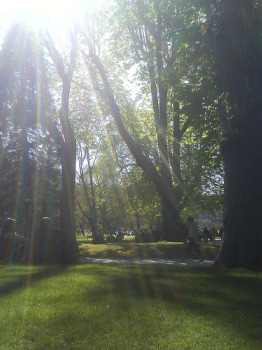 Paris is one of those cities that’s popular year-round, and arguably most popular during the summer (despite the fact that it can get roastingly hot and it feels like every other tourist on the planet is in the city with you). But savvy travelers know that by shifting their trip plans by just a couple months they can experience a city that’s far less crowded, much less sticky-hot, and no less beautiful or charming.
While Paris in Autumn may be many peoples’ favorite time to be in the city, the other shoulder season can be equally as lovely and temperate. And since Spring in Paris is the season they’re singing about in that song about April, that’s all the more reason to plan your visit then.

Getting to Paris in the Spring

Because Paris is popular year-round, as mentioned above, there isn’t what you’d really call a “low season” as far as prices go. But while prices won’t drop as far as they might in truly seasonal vacation spots, they do drop a bit outside the peak summer season – and it’s in the off-season that you’re much more likely to find special discount fares.
So you’re more likely to save money on your Paris airfare by traveling in the Spring, although prices will tend to go up as you get later in the season. For the best prices, book in March or early April.

Paris isn’t typically gripped by frigid temperatures in the winter, but the Spring thaw is still a delight. After a few months of cold, more than a little rain, and plenty of gray clouds, the sight of new flowers and more consistent sunlight is always welcome – to Parisians and visitors alike.
Earlier in the Spring you may still get rained on, so it’s not a bad idea to have a small umbrella with you, but the average temperatures climb noticeably from February into March. The nights are still cool, so layering is good policy. Pay attention to current Paris weather forecasts as you’re coming up to your trip, as much of Europe has been experiencing unseasonably warm weather in the Spring in the last few years.
>> Read more about weather in Paris

Things to Do in Paris in Spring

Easter
Although Easter is a moveable feast, it does always occur in the Spring – so no matter what the exact date is this year, you’ll want to find out so you’ll know if your trip to Paris coincides with the holiday. Easter in France is a major holiday, and even if you’re not planning to celebrate it while you’re in Paris it may cause some of the attractions and restaurants to be closed – so it’s important to know when it is.
Because Easter is more typically a family holiday, there aren’t as many big city-wide celebrations as there are for other national holidays in France. The biggest exception to this is well outside Paris in the Mediterranean city of Nice, where they celebrate Carnival just before Easter.
Paris Marathon
There are very few events each year that shut down the grand Champs-Elysees boulevard, and one of them is in the Spring – it’s the Paris Marathon. Whether or not you’re running in the event, you’ll need to know when it is as road closures and excess crowds along the route may impact your ability to get around the city.
Paris Fairs: Foire de Paris & Foire du Trone
Springtime in Paris means city fairs, and spending time at one of Paris’ two big fairs is a great way to get off the beaten tourist path and see how Parisians pass the time.
The Foire de Paris runs from the end of April through May, and it’s not what you’d consider a carnival-style fair. It’s held in convention halls and is all about wine, food, and design. You can skip the interior decor parts of the fair and concentrate on the parts where you get to sample French wine and food.
The Foire du Trone is a carnival-style fair that’s fun for kids of all ages. It runs from the end of March through April and has been a fixture on the Paris calendar (in different forms) since the 12th century. Today’s Foire du Trone includes carnival rides and decidedly un-French carnival treats.
Museum Night
Parisians, like many Europeans, start dinner later and tend to stay out later when they go out, too. But pulling an all-nighter in Paris’ museums isn’t something that happens every day. In fact, it’s just once a year, on Museum Night. Museums all over the city stay open all night on Museum Night, and what’s more, they let everyone in for free. If you’re in Paris on Museum Night, it’s a fun way to spend the evening hours and save money on admission fees, too.
The exact date of Museum Night changes each year, but look for it in mid-May.
Worker’s Day
Worker’s Day – May 1 – is a major national holiday in France (and through much of Europe), when you’ll see very few (if any) shops, banks, restaurants, and attractions open for business. This isn’t a holiday that involves big city-wide celebrations, either, so make sure you’ve got your bases covered for what you’ll do and where you’ll eat on May 1 if you’re in Paris.
As a side note, if May 1 is a Monday or Friday, you can count on lots of Parisians making a three-day weekend out of it and heading out of the city. You might want to follow suit.
Victory Day
Another nationwide holiday in May is Victory Day, on May 8, which celebrates the end of World War II. Victory Day isn’t as likely to cause city-wide closures in Paris the way Worker’s Day is, but some attractions, shops, banks, and restaurants may have shorter hours or be closed for the day, so make note of that when you’re planning your trip.
French Open
If you’re a tennis fan then you already have the French Open marked on your calendar. And even if you’re not a sports fan, if you’re planning a trip to Paris in May you’ll want to find out when the tournament is anyway – because it means there will be more people coming into the city to watch the matches, and potentially higher prices on things like hotel rooms (and maybe even hotels being booked up).
For those of you who are hoping to score tickets to some of the French Open matches, be prepared to fork over a hefty sum for them – and get your tickets as soon as you can. It’s expensive to buy them from authorized retailers, but you run the risk of paying extortionist prices to scalpers if you wait until you get there.

Other Useful Information about Traveling to Paris in the Spring