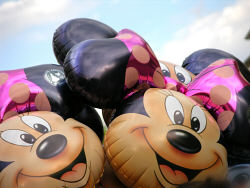 Visitors to the Paris Disney Resort (also called EuroDisney, or even DLP by those in the know!) from October 4 through November 2, 2008 will be treated to what they’re calling “a truly unique Halloween experience.” Pumpkin-head wearing characters will roam the entire park (Disney’s calling them “pranksters,” so beware!), and Frontierland will be known as Halloweenland for that time. There will be a show in front of Sleeping Beauty’s Castle, a stage in Halloweenland, and a Halloween-themed parade. Additionally, Jack and Sally from Tim Burton’s “Nightmare Before Christmas” will be added to the usual cast of characters (who’ll be donning their own Halloween costumes) at the Disneyland Paris Resort. 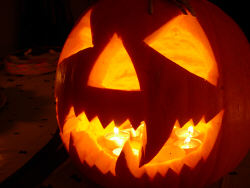 All of that is going on for the duration of the Halloween Festival at Disneyland Paris, but on Halloween night itself there will be some one-night-only events as well. Makeup artists will be available to turn you into a pumpkin-person or a vampire, there will be a special fireworks display and parade, and the park’s hours will be extended so you can enjoy the rides and attractions at night. For the little kids, there’s also “Mickey’s Not-So-Scary Party,” which runs on October 10, 17, 24, and 28 from 8-11pm.

For more general information, see the page about the Disney Paris Resort – and for more information about the Paris Disney’s Halloween Festival, check out the animated site here.