Souvenir Shopping in Paris: It's About Remembering 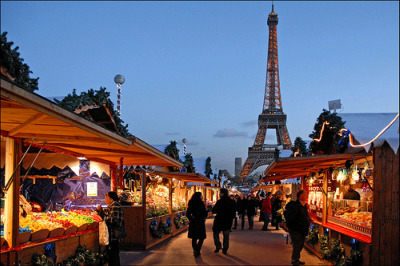 I don’t consider myself the kind of person who really loves shopping when I’m at home. I don’t mind a day spent browsing a few favorite stores with a gal pal, and I do have an internal victory dance that happens every time I find something particularly wonderful (especially if it’s on sale, and especially if it’s jeans that fit), but I’m not someone who gets so much enjoyment out of the act of shopping that I think about it as a vacation activity. And yet I always end up doing a little shopping, wherever I am.
Of course, in some places it’s easier to think about shopping as a vacation must-do item – and such is the case in Paris. Shopping in Paris isn’t just for tourists, either, it’s a local pastime. With its reputation for being one of the fashion capitals of the world, Paris is rightly known for its many boutiques and upscale department stores. You could drop a pretty euro outfitting yourself in the latest styles, only to have them outdated by the end of your two-week trip. Even if you found a great deal on flights to Paris and you’re staying in one of the many cheap hotels Paris offers, however, forking over the asking price on those designer outfits usually isn’t an option. You might be saving money on airfare, but not that much!
And even if fashion isn’t your thing, it can be hard to resist all the tacky Eiffel Tower souvnirs you see in every touristy shop – they’re amusing for their kitsch factor alone.
But Paris offers more than just high fashion and Eiffel Tower snow globes to would-be shoppers. As mentioned, the Parisians love to shop, too, and they certainly aren’t all wearing haute couture and Eiffel Tower-embroidered berets. For a taste of what it’s like to shop like a Parisian, you have to find out where the Parisians shop.
I’ll admit that the words “flea market” never conjured up much of a positive image for me until I went to a flea market in Paris. The flea markets I was used to were crammed with what I considered to be junk – but somehow the tables of Paris’ flea markets looked like they were covered with treasures. And since the flea markets in Paris aren’t right in the city center, the shoppers you’re competing with to score one treasure or another are more likely to be locals than other tourists.
Nevermind that the exact same object you’re coveting at that flea market in Paris is something you’d probably scoff at if you were at a flea market back home – you’re buying it in Paris, so it counts as a souvenir. Souvenirs are different.
Is a piece of clothing more your style when it comes to souvenirs? Then there’s no better reminder of a trip than something you can wear over and over again that will give you the opportunity to repeatedly say off-handedly, “Oh, this? I got it in Paris.” Yes, that’s a thrill that never gets old – and it’s not reserved for wealthy travelers, either. Sure, Parisians may all look like they’re sporting the latest Armani or Hermes duds, but not all of them are. The rest know where the cheap clothes shops in Paris are – which is where you’ll want to go if you’re a fashionista on a budget.
But the truth is that even if you’re just looking to pick up a couple small things to remember your visit to the French capital, there are souvenirs in Paris that go beyond the stereotypes. A swing through bargain department store Monoprix could yield some sexy French lingerie, easy-to-pack dish towels or cloth napkins, and pretty French beauty products – and that’s just one store!
A souvenir just has to remind you of the place where you bought it – which means it doesn’t need to have the word Paris written on it for you to know you bought it in Paris, right? And it doesn’t need to be purchased in the shadow of the Eiffel Tower in order to be authentic – which is a good thing, since souvenirs that are for sale within eyesight of any of Paris’ major tourist attractions are almost without question completely overpriced.
The bottom line is that whether you’re a shopper or not, every time you look at that French children’s book you bought from the booth overlooking the Seine you’ll remember your trip to Paris. Nevermind that you can’t read French and you don’t have kids. Every time you pull that waxy tablecloth you found at the Paris flea market out of the closet and flap it open over your patio table, you’ll remember your trip to Paris. Nevermind that the fabric isn’t emblazoned with an image of the Eiffel Tower and that no one will know where you bought it. You know. Every time you pull on that peacoat you dug through a pile of discounted clothing to find in that weird Paris shop, you’ll remember your trip to Paris. Nevermind that the label clearly says Armoni instead of Armani.
You remember the smell of the rows of old books in the bouquinistes booths, the chatter of book sellers and book buyers mixing with the sounds of a busy city surrounding you. You remember the look of the Paris flea market, table after table of oddities and Parisians rifling through them. You remember the sound of that discount clothing store, all those people digging their way through bins and racks to find the hidden gems.
And that, in the end, is what a souvenir is all about.
photo by dalbera