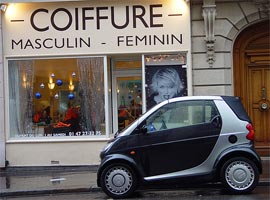 Thirty years ago, Paris used to have tons of small cars. For the past twenty years we’ve been renting or leasing cars, and each year the Peugeot models have added more length and breadth. Still the Peugeot 206 that we drive is easy to park in tight spaces. Yet, the 206 is humongous when you compare it the Smart Car.
You can’t miss the Smart Car. It’s everywhere in Paris – and with good reason. As parking becomes more and more of a problem, the tiny Smart Car can wedge its way into the most impossible looking parking spots. Or, as the Bobino night club Smart Car proves, you can even park it by your front door. 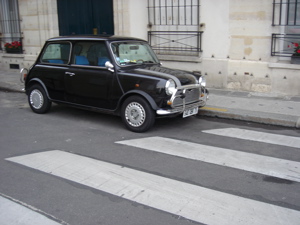 Although the Smart Car concept comes from Swatch in Switzerland, the actual car is produced in France – which is why you see so many of them in Paris compared to other small hybrids. (The Smart Car we looked at runs on gas and partially on electric). Fully electric cars are available in France – and you can drive them without a driver’s license, but you’re more likely to find these cars out in the country rather than in Paris. Le Blue Car, a fully electric car that could travel 250 km before recharging was originally projected for commercial production by the end of this year (2008). Unfortunately the Blue Car (as we know it) has been shelved. 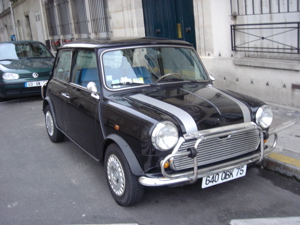 During an evening walk through Ile de la Cite and the Latin Quarter, I also noted a number of Cooper Minis. The Cooper Mini has been part of the Parisian landscape long before the Smart Car saw the light of day. It definitely wins the ‘cute’ award although it doesn’t have the cache of being partly electric – so it’s cute, but not so smart.
If you spend much time in France, your concept of a ‘big car’ begins to change rapidly. When the rare Range Rover zooms past, it can be quite a shock. Aside from French and British cars, you’ll be surprised to see some small Toyota models that don’t ever make it to the US. You’ll find the occasional FIAT which can definitely compete with the Cooper Mini in the adorable category. 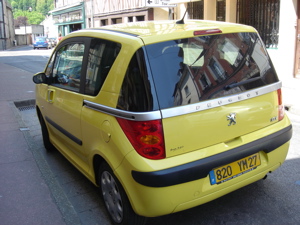 And lately, the Peugeot 1007 is a small four seater with sliding doors. They wanted to call it 007 originally.
As cute as some of these cars may be, it’s hard to beat the classic Deux Cheveaux which celebrates its 60th birthday. No longer in production, you might be lucky enough to see one of the older models still on Paris streets. Its cloth roll-back sun-roof will bring back memories for some of a slower-paced Paris.
Must-see Video about History of Electric cars in the USA 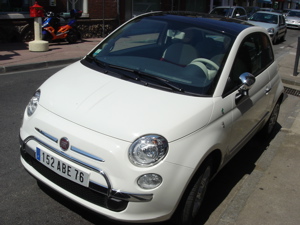 If the price of gas continues to increase, maybe those days will be back sooner than we think. Yesterday, it cost us about 75 US Dollars for 3/4 of a tank for our little 206 Peugeot. I’m thinking ‘Electric convertible’ for the next car in France.
Trivia: Did you know that a French inventor in Rouen designed a hydrogen-powered car in the 1950s? No company would back his plan – and that he died – mysteriously?
Did you know that France had an electric car back in the 1890s? It was called ‘Jamais Contente’. Never satisfied. Is it time for Mick Jagger electric car?