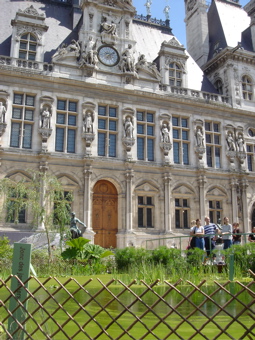 Even though the Rodin Museum is located on the Left Bank, its central location makes it easy to reach a number of different neighborhoods for afternoon visits. Easiest of all is Les Invalides and Napoleon’s Tomb, but we’re eager to visit the remains of medieval Paris, so rather than linger in the 7th arrondissement, we opt for a stop at Paris’s City Hall – Hotel de Ville before visiting St. Gervais-St. Proteus, then crossing over to Ile Saint Louis, Ile de la Cite and the Latin Quarter.
Apart from being the mayor’s office and the site of some excellent free temporary art exhibits (i.e. Paris en Couleurs, last February), the Hotel de Ville or City Hall is well worth a pause to admire the Renaissance-style façade and the large Hotel de Ville square. (The current building was reconstructed from 1874-1882 after it was burned down in 1871 under the Paris Commune).
The history of this square as the City of Paris’s administrative center goes back to 1357 when Etienne Marcel (Paris’s city provost) bought the House of Pillars which stood where the Hotel de Ville now stands. Etienne Marcel was Paris’s feisty top gun i.e provost or mayor who didn’t hesitate to stand up to the king.
These days, the Square is exceedingly sedate. Recently, a bio-diverse park has been constructed. The project is called ‘A Garden For All Time’. More proof that Paris wants desperately to go green (at least its mayor does!). In the winter, there’s a skating rink. The square or the ‘greve’, as it once was called in the past, has great symbolic meaning for Parisians. Here’s where workmen congregated to find work at the epicenter of the wealthy merchants’ neighborhood. In the old days ‘faire le greve’ meant heading for the square to look for temporary work. Nowadays, ‘faire greve’ means going on strike. 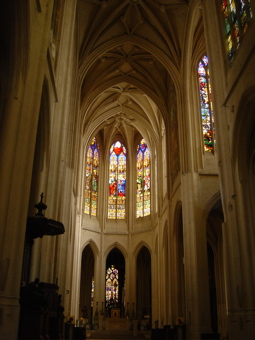 It may seem like sacrilege to visit any church in Paris before seeing Notre Dame Cathedral, but St. Gervais-St. Proteus is well worth a detour.
Tucked behind the Hotel de Ville, it’s easy to miss. In spite of its unremarkable façade, its interior provides an excellent example of flamboyant gothic architecture. One of Paris’ oldest Right Bank church locations, St. Gervais poised on high land provided respite to townspeople when the marshy surroundings were flooded. The elm tree planted in front of the church was the meeting place for people to pay their debts. The expression: “Meet me under the old elm tree,” was comparable to today’s expression “The check is in the mail.”
One of the reasons we’re visiting this church is to admire not only medieval stained glass but also the work of a 20th century stained glass artist, Sylvie Gaudin, who portrayed Bible scenes in an abstract form. Sadly, she died in 1994 before she saw her stained glass installed. Her portrayal of the Pentecostal flames of light deserves special recognition.
Directly behind St. Gervais, you’ll find not only the old East/West Roman thoroughfare Rue Francois Miron, but also an extremely well situated MIJE hostel on Rue des Barres. 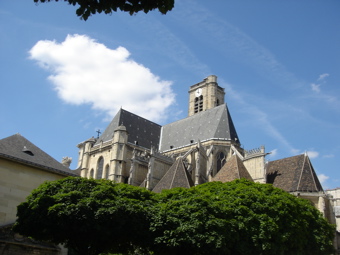 From St. Gervais Church you can cross right over to Ile Saint Louis by way of the Louis-Philippe bridge. You’ll find the pleasantly shaded terrace of Ile Saint Louis’s best brasserie (in my opinion) Brasserie de l’Ile de la Cite at 35, Rue du Quai Bourbon (just opposite the bridge that connects Ile St. Louis to Ile de la Cite & Notre Dame. Here’s where we enjoyed lunch.
The Brasserie serves up Alsatian specialties such as choucroute (sauerkraut). The original owner left the Alsatian region of France when it was occupied by Germany in the 1890s.. He brought his traditional recipes with him. Try the ‘Coq au Reisling’ chicken (actually rooster) simmered in a savory reisling and tomato-based sauce. (You’ll want to make this your major meal of the day. The food is excellent, but you may find the price to be somewhat expensive.) As a rule of thumb, brasserie food tends to be more expensive than tea salons (which is your other option for meals that fall in between the normal lunch and dinner hour. 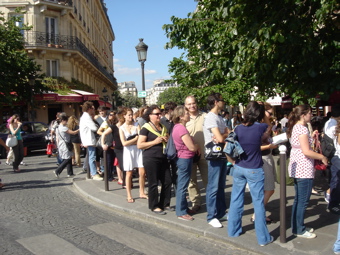 The Brasserie’s just across the street from Berthillon’s ice cream stand, so you can sit and watch hot and tired tourists line up for the delicious ice cream that never goes out of style.
Notre Dame Cathedral
Approaching Notre Dame Cathedral from Ile St. Louis is easy. Just cross the bridge that connects the two islands – Ile St. Louis and Ile de la Cite. Very often, you’ll bump into either a mime or live music on the bridge (because the bridge is completely car-free). 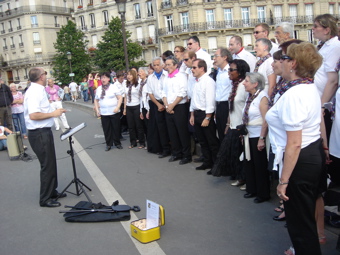 Today happens to be the Fete de la Musique, so we’re treated to a gospel music concert by the 10th arrondissement gospel singers. Later in the evening, a full-fledged concert will be offered inside Notre Dame Cathedral, but judging by the lines already forming here at 6 pm, we’re opting out for the organ concert and children’s choir. (I’m already regretting this decision) but sooner or later, during a six-day visit, the fatigue factor is going to catch up with you (even for the tour guide!).
Getting inside Notre Dame Cathedral on a beautifully sunny summer afternoon can be a challenge for the claustrophobic. I still haven’t discovered the best time of day to avoid crowds and still admire the play of sunlight on the magnificent stained glass transept and rose windows. 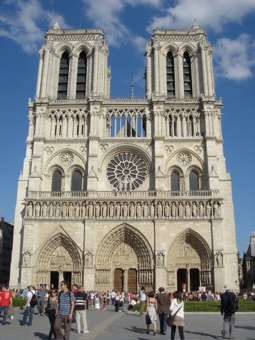 If you wait for the fall or winter months, the church interior is much more accessible. Will Yinjie, Diana and James ever forgive me for not insisting on braving the crowds to see Notre Dame’s interior? If your tour guide should be so negligent, you definitely should ask for a refund. This is one of the ‘musts’ for any trip to Paris. I’m mentioning this so that my guests will remember that I owe them a visit to Notre Dame for their next visit (to ensure that they return to Paris as soon as possible!).
Fete de la Musique – Viewed from the Left Bank 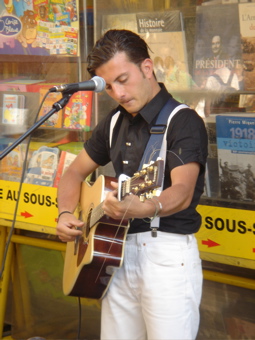 You may recall in a past post that I mentioned we would definitely celebrate the Fete de la Musique on the Right Bank. The program has changed as the crowds increase by the minute on Boulevard St. Michel. We are winding our way through the Latin Quarter past thickets of onlookers. Get to the middle of the crowd and you’re likely to see not much more that a body and a box – that’s the DJ and music machine – 21st century version of an organ grinder.
Fortunately, not all of the Fete de la Musique is processed music – not by a long shot. Just a few steps away, a live vocalist strums his guitar. On Blvd. St. Michel, drummers tap out a hypnotic rhythm. 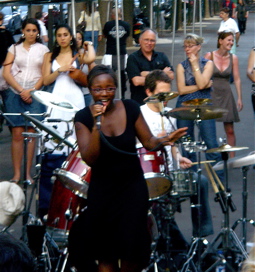 On Edgar Quinet, a soul singer enraptures her audience.
We don’t have to go as far as Gare Montparnasse concert or Denfert Rochereau concert to hear the howling, growling accompanied by the steady techno thump (which can be heard from our apartment window). Music to sleep by? Not quite. Fortunately the Denfert Rochereau concert ends at midnight. surely, we’ll catch a few hours sleep before waking up at 6:30 am for our trek to Normandy.
Mont St. Michel awaits.
Did you miss Day One and Day Two of Six Days in France? Start from the beginning:
Six Days in France
Day Two