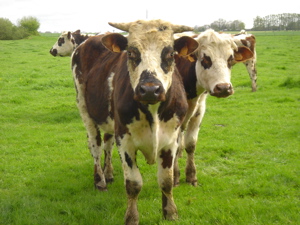 Photos by Chris Card Fuller ©2008
For truly urban creatures, spending one day wandering around in the mud at Mont Saint Michel might be enough. Then, there are those of you who are eager to squeeze as much French culture as possible into six days. By lingering in the Norman countryside after visiting Paris’s top museums and monuments, you’ll get a really well-balanced perspective of France. Normandy is easily accessible from Paris either by train or by car. Catch your Normandy-bound trains at Gare St. Lazare – or take the A13 following signs for Rouen off the southern peripherique. The toll route A14 via La Defense will also get you to Normandy.
If you choose to stay overnight on the Mont Saint Michel islet, (as I suggested in yesterday’s post) I’d recommend heading toward Bayeux. Bayeux, home to the Bayeux tapestry is app. an hour’s drive from the Mont. Bayeux was one of the few towns left unscathed from Allied bombings. It houses the extraordinary 11th century tapestry that recounts William the Conqueror’s conquest of England. Described by some as a sort of embroidered comic book account of the Battle of Hastings, the tapestry is a well preserved artifact for one of the most amazing feats in military history. The vestiges of a much more recent military feat, the 1944 D-Day landings at nearby Omaha Beach and, particularly the U.S. military cemetery at Colleville have been the focal point for commemorative services every year since the landings.
However tempting it would be to stay in this section of Normandy known as Basse Normandy, we are set on taking our visitors into the very heart of rural Normandy – the departement de l’Eure. Where we stay in Eure is REALLY in the boonies. Only three hundred and thirty-three people live in our village. Probably the cows, sheep and chickens have us outnumbered.
The conversation quickly turns to cows. How is a Norman cow different from a Holstein or a Jersey cow? How long do cows produce milk? Suddenly, I realize how poorly prepared I am to give an account of the average cow’s milk production. Surprisingly, the Norman cow, which is white and brown-spotted as opposed to the Holstein who is black and white spotted, has recently been at risk of disappearing from the landscape. In recent years, farmers have been bringing in other cows, including the ‘belles blondes d’Aquitaine’ the beautiful blondes and the Limousines who supposedly produce more milk (but they don’t live as long).
Happily, the Norman cow is making her comeback, and hopefully the apple orchards- that produce that delicious spiked cider we had at the creperie back in Paris -will also make a comeback (at one point farmers were being encouraged to uproot their apple orchards and go into different sorts of crop production).
You can see how a few days in the country can really change your perspective on some of the most important aspects of being in France. Suddenly the cider in your glass or the lamb that’s grazed on the salty marshes surrounding the Mont Saint Michel cannot just be considered as something that tastes exceptionally good. You begin to appreciate the entire process, the lives, and livelihoods focused on bringing that regional specialty to your plate. (This is a subject on which I could talk for hours – but rather than do so, I’ll cut to the chase).
We are in Eure – and outside of Paris – there’s no place better to be on Earth. The sun is radiant, not a cloud in the sky and we have an entire morning to recuperate from the quicksand experience. Although none of the D-Day landing areas are close to our part of Eure, getting to the ‘Cote Fleurie’, the stretch of beach resorts starting with Honfleur port onward to Cabourg is about a 45 minute drive – if you don’t take a wrong turn. Of course, we did take a wrong turn. 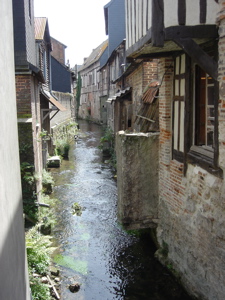 This brings us to Pont Audemer – the Venice of Normandy. Pont Audemer was originally settled by the Romans and much later was settled by the founder of Hermes. (That’s Pont Audemer in a nutshell). Hermes’ founder started off his career as a saddle maker and eventually moved to Paris. Unlike Honfleur which is a port town, Pont Audemer has plenty of examples of 16th-century townhouses that remain unruffled by the occasional tourists who traipse through town. Pont Audemer’s twice a week outdoor markets probably haven’t changed so much since the middle ages. 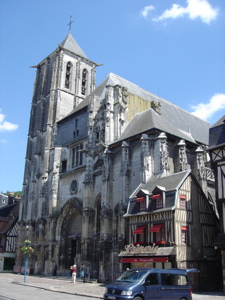 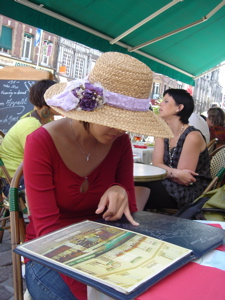 Pont Audemer’s church
One would be hard put to argue against the beauty of Honfleur’s horseshoe harbor,its imposing lieutenant’s tower which overlooks the port, or the unusual St. Catherine’s church with its double roof constructed from ship builder’s timber. I always feel after a trip to Honfleur that I have yet to grasp its true character. Champlain departed from Honfleur to discover Quebec City. Still an active fishing and shipping port, Honfleur just looks a little too cute to be real. Still, you won’t be able to resist taking a few photographs – or even quite a few. 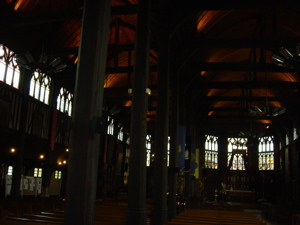 Interior of St.Catherine’s church, Honfleur
From Honfleur, you can drive along the Cote Fleurie, as we did, and drive right past the Saint Simeon Farm where the impressionist painters sojourned. Here, they were able to take advantage of the extraordinary Norman light. Summer days last till 10 pm and the sun’s rays shoot across the horizon in the most unusual ways. Even if you can’t paint worth a lick, it’s easy to understand how the landscape begs to be reproduced – on a canvas – with a camera – or with words. 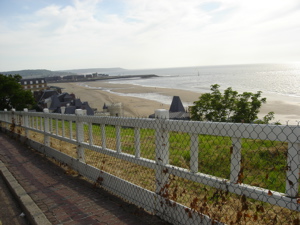 The coastal road will lead you right into two of the most well known Norman beach resorts: Trouville and Deauville. I showed Yinjie, Diana and James the restaurant where our last visitor Lori found a fly in her cream sauce. When she sent back the plate, and it was returned, it looked like the fly had been chopped up into much smaller pieces and spread around the plate. This was a restaurant right on the boardwalk and it’s frequented by the most oh- so-very- Parisian clientelle ( I won’t mention their name but neither will I recommend eating a meal on the Trouville boardwalk). 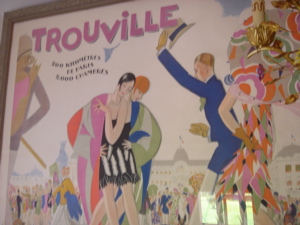 Trouville, however, is a great place to walk your dog – if you have one. You’ll find plenty of other people walking their dogs on the boardwalk. Bring your own lunch.
From Trouville, we headed back to the Departement de L’Eure via Calvados Departement including the pilgrimage town of Lisieux.
Here, you can see the Basilica of Saint Theresa the Little Flower. St. Theresa or St. Therese is France’s second patron saint after Saint Joan of Arc (who was burned the stake in Rouen, Normandy by the English).
We ate at a Chinese restaurant in Lisieux called the Golden Dragon. I would definitely recommend the Golden Dragon (which is located right next to the Intermarche (far from any tourist sites). The owners of the Golden Dragon used to have a restaurant in Montmartre.
Now that we’ve had a chance to drive through the Norman countryside past apple orchards and grazing Norman cows, past fields of linen and wheat, past neighbors’ thatched roof cottages, it’s time to pay a visit to Claude Monet’s home and garden. But that will have to wait for Day 6.