It’s not too early to start staking out your spot for the triumphant arrival of the Tour de France in Paris. This year (2008), the Tour de France cyclists will zoom along the Champs Elysees, do their final circle round the Arc de Triomphe on Sunday, July 27th.

If you plan on being in town for that Sunday, you may want to take an early stroll down the Champs Elysees to choose among the innumerable cafes ranging from burger joints to ornate tea salons, but sentimentally speaking, I’d be hard put to go anyplace other than the Publicis Drugstore, 133 Avenue des Champs Elysees. That’s the place where we first saw the Tour de France tear up the pavement.

Not only that, but the Publicis Drugstore is perfectly situated at the corner of the Champs Elysees and the Arc de Triomphe so you do get a great vantage point.

There are other cafes along the Champs that have a more time-honored reputation such as Fouquet’s or La Duree, but ‘Le Drugstore’ holds a particular place in my heart – as being one of the few places on the Champs where as a poor student, I could afford to splurge on a ‘Salade caifornienne’. Even back then ‘Le Drugstore’ was a stylish place to wander about on a Friday or Saturday night.

Still, to this day, I don’t know how we managed to find a table to watch the Tour de France several years ago, but I think we ended up standing on tip-toe.

These days ‘Le Drugstore’ has reinvented itself – evolving with each generation. It cheered along France’s soccer team in 1998, creating a facade to match the team’s colors and, at the beginning of the new millenium went through another revamping. 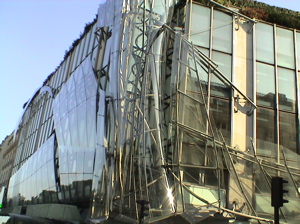 If you’re wondering why I’m making such a big deal about a ‘drugstore’, the first thing to understand is that the Publicis Drugstore has never been anything comparable to an American ‘drugstore’ or a British ‘chemist’. The closest shop concept in the U.S. might be a ‘Sharper Image’ if the ‘Sharper Image’ also included a Brasserie and a more upscale restaurant.

Add to that a movie theater, a cigar boutique, and an international newspaper and magazine kiosque, a winery complete with winetastings … you start to get the picture. This is your down-the-corner Mom & Pop ‘drugstore’ gone Gucci with everything under the sun – even pharmaceuticals (but you’ll hardly recognize the traditional green cross that you see posted for the typical French ‘pharmacie’.

Another good reason to scout out Le Drugstore well before July 27th is to catch the Design Lovers which will be highlighting some of France’s most revered designers including Philippe Stark and Jean Nouvel. The fun begins today July 18th and will last through August 29th. You’ll find some samples of France’s top designware right here at Le Drugstore at surprisingly affordable prices.

When you do arrive at the Champs Elysees (get off at the Metro: Charles de Gaulle Etoile or Metro: George V), be sure to pick up a Tour de France t-shirt. A great souvenir for wearing to your work-out when you’re back home.

For those that can’t stand the crowds (I hear you!), Google has come up with a great way to enjoy the arrival of the Tour de France in Paris without ever leaving your computer station. I know that nothing compares with actually being there and absorbing the anticipation of that first cyclist leading the pack . . . but the Google visual map of the Tour de France route is frankly amazing. The video image of various towns in France makes you want to hop on your Velib bike and retrace the route.

Trivia: Did you know that the Tour de France’s final stage didn’t originally end up at the Champs Elysees? Originally, the race ended at Parc des Princes. It wasn’t until 1975 that ‘La Grande Boucle’ graced Paris’s most famous avenue and circled the Arc de Triomphe.

You can find more Tour de France Trivia Tidbits (in French) but I’ll translate some of these for you in the next few days. ““Ten Anecdotes on the Tour de France”

Other suggestions for Champs Cafe/Restaurants:

Deli’s Café
76 Champs Elysees
Metro: George V or Franklin Roosevelt
(We tried Deli’s Cafe once – I noticed that it was listed in ‘Sortir a Paris’, but I honestly can’t say that it really stood out in my memory – except that it should be less pricey than some of its more glamorous neighbors).