What better time to be in Paris in September than for the annual Apple Expo Remix? This year’s Apple Expo begins on September 17th through to September 20th ’08. The convention will be held at Paris’s Porte de Versailles Convention center, located in Paris’s 15th arrondissement.

Some of the highlights of this year’s expo will be of interest to fellow bloggers. A workshop on blog journalism will cover such issues as how to check one’s sources on the internet For all of you bloggers out there who like to do your fact-checking (yes, some of us do try our best to get the facts!), you’ll want to make sure not to miss this workshop.

And here’s one for budding movie directors: Cinema and Music Creation. If your videos are not complete until you’ve found just the right soundtrack to go with your video, then I know you’ll be at this workshop. (September 19th). The description sounds too tantalizing to pass up:

“Cinema and Music creation -the bond between a film director and the score’s composer are sometimes strong enough for their collaboration to become recurrent, resulting in the birth of mythical “cinema couples”, but we also sometimes see the creation of “digital couples”. The Mac platform has become the preferred tool for film score composers, who are always on the lookout for new emotions and new sources of inspiration.” A live composing session is part of the workshop.

What will be the only thing missing from the Apple Expo? Apple. Apple-Expo organizers don’t give the answers as to why Apple won’t be partcipating the convention which has been running since 1998, but it’s suggested that preparations for the new Apple store at the Carrousel du Louvre may explain no Apple participation this year. Cedric Taillandier comments about what will happen to the space normally reserved for Apple (comments in French)

New Apple Store at the Carrousel du Louvre
Even if Apple won’t be participating in the Apple Expo, you may already know that Apple will soon become a fixture of the Carrousel du Louvre. Although the actual opening date is still under wraps, the new Apple store should look pretty good in the neighborhood of IM Pei’s pyramid. 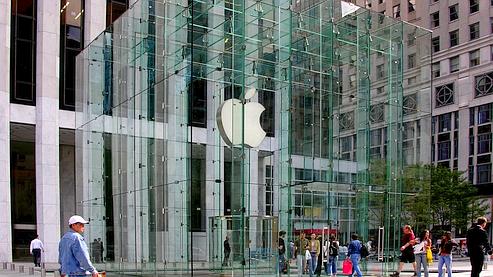 Early in June, Apple confirmed it will open a store in the Carrousel du Louvre, the shopping center in the Louvre Palace next to the famous museum and glass pyramid. It’s been reported that Apple will occupy 7,696 square feet of space on two floors.

Would it be a surprise to you if the new store’s opening might possibly coincide with the dates for Apple Expo?

You can get a FREE electronic entrance badge if you order online (otherwise it costs 12 Euros at the door).

Remember that hotels in Paris book very quickly for September, so book NOW!

Cheap travel: Did you know that Air France offers discount flights specifically for conventions such as the Apple Expo and the Paris Auto Show.