If you’re just learning French, one of the most intimidating experiences can be going to the Post office or ‘le bureau de poste’. In recent years, the post office ordeal has become much easier thanks to the automatic postage machine which you’ll find in every bureau de poste and in some of the larger supermarkets like the Monoprix at Edgar Quinet (Montparnasse).
A postcard from France to anywhere outside of the European Union currently costs 85 centimes. You can either wait in lines that normally move slow as molasses (and lose valuable walking around Paris time) or you can use the automated machine which gives instructions in English as well as French. Place your envelope or card on the scale (on the top of the machine). Follow the instructions which will ask you if you’re sending the letter/card domestically or to a foreign destination. The machine will tell you how many coins to deposit and it will issue a metered stamp (and change). Metered stamps need to be mailed at the time you buy them. 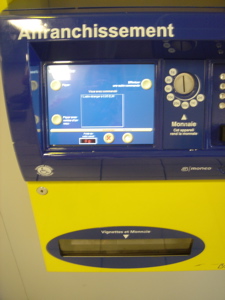 You can also buy postage stamps in some ‘tabacs’ /cafes which also sell phone cards.
If you want to mail a letter, look for the postal boxes painted yellow. You’ll note there’s four slots, one just for Paris mail and the others – for the rest of the world. If that doesn’t speak volumes. What else is there except Paris?
Banlieus – suburbs, province – every place else in France, etranger – other countries.
Mail within mainland France moves quickly (except if there’s a strike). You can expect your recipient to normally receive a letter in one day. Postcards sent to the US should arrive within a week.
If you’re going to the top of the Eiffel Tower, there’s a little post office right on the Eiffel Tower. Great place for an unusual postmark.
Paris also has a post office museum in Montparnasse. I admit I haven’t yet visited the Post Office Museum.
If you wonder why lines move so slowly at the post office, keep in mind that in addition to being a post office, La Poste is also a bank. People come here for all sorts of reasons that have nothing to do with mailing letters. In the old days, this was also where you came to send telegrams and make overseas phone calls. Ahh, yes, long before the advent of internet and mobile phones. The Stone Age. 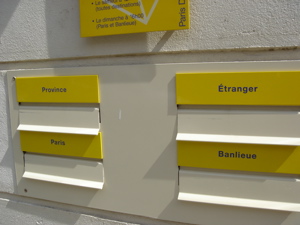