Savvy Meridien-Montparnasse Hotel Manager is Talking Back: He wants to know what you think! 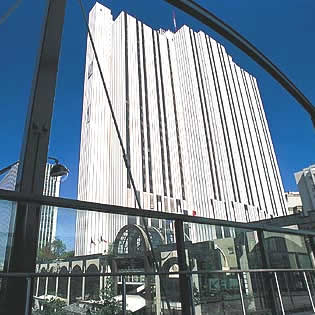 If you’ve been cruising the net lately, you’re bound to have run into Oliver Servat, Hotel Manager for the Meridien Montparnasse Hotel, at 19 Rue Commandant Mouchotte, Paris 14eme.
Photo from www.venere.com

He’s taking on customer complaints, one at a time. In the good ole US of A, we’d call this ‘good follow up’. As Parislogue readers know, my hotel-related posts are primarily based on friends visiting Paris (who give me their untarnished opinion):
Hotel Langlois

I also tend to pinhole tourists in the neighborhood to get their gut reactions to their hotel stay (before they get back home) and have more time to either tear apart their hotel experience from limb to limb – or forget the frayed carpeting in the afterglow of the ‘trip of a lifetime.

The 4-star Meridien Hotel, a 953-room behemoth, which in another lifetime was the Sheraton Hotel, happens to be in my ‘hood’ literally across the street, so I’ve taken an interest in the hotel for a number of reasons. To begin with, it has a Michelin star restaurant the Montparnasse 25 (where we’ve eaten twice). It has underground parking. The Air France shuttle bus from Charles de Gaulle airport stops directly across from the hotel (available to ALL airport passengers, not just Air France passengers for reasonable 14 Euros).

I’ve noticed that many of the American clients at one of our local ‘cantines’, the Pizza Roma on Avenue du Maine are staying at the Meridien.

It’s been described by a number of reviewers as an ‘American style’ hotel in Paris (no doubt the previous Sheraton incarnation has something to do with this). Apparently a favorite with some tour packages – and with some incredible room rates for a 4-star in Paris on Venere and Priceline (most recently 147 Euros on Venere), it has also received a raft of negative comments on Trip Advisor – ranging from rude staff, shabby, outdated rooms.

After reading the large number of negative reviews I‘d normally say, “well, let’s move on,” but after many of the negative reviews (and also the positive reviews), the name Olivier Servat kept popping up to say more or less okay, we’re going to check into this – and see if we can fix this problem.

According to Servat the Meridien is undergoing some renovations, so some of the rooms may be updated by the time you get there. For those of us who cannot afford to stay at chic little designer hotels that grace the pages of upscale travel magazines, it’s nice to know that you can still be in the heart of Paris and not break the bank. For those that are part of travel packages which include the Meridien as your first stop, never fear – just look up Olivier.

Meanwhile, I have a bone to pick with some reviewers who’ve ‘dissed’ my ‘hood’ (Monparnasse) as being unsavory, lackluster or too far away from the ‘attractions’, i.e. Louvre, Notre Dame, Eiffel Tower. Regarding getting to the ‘sites’ as I’ve mentioned in past entries, all you need to do to get to the Right Bank, is take a short walk to the Montparnasse train station. Directly to the left of the terminal, on the esplanade, you’ll note a semi-circular bus terminal where the #95 bus will set you down directly across from the Musee du Louvre.

Champs Elysees? Take the Metro LIne #13 from the Gaite Metro stop, just around the corner from the Meridien and you’ll walk out of the Metro onto the Champs Elysees Rond Point.

Notre Dame? Take the Porte de Clignancourt direction of the #4 line at Montparnasse station and get off at Metro stop: Cite.

You get the picture – if you’re willing to use public transportation, walk a bit, or spring for a taxi, Paris is at your fingertips.

Ready to do your hotel search? Why not start your search with the Bootsnall.com Hotel Guide?